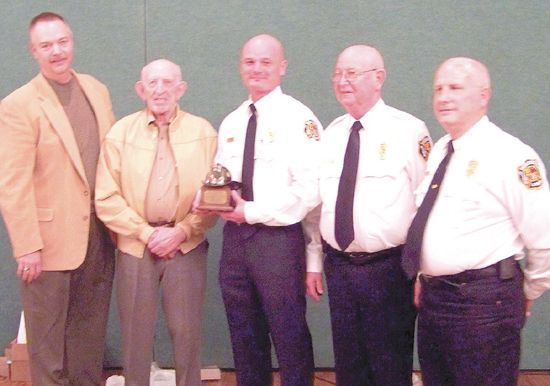 HIGHLANDS The Highlands Volunteer Fire Department held their 2011 Installation and Awards Banquet last Saturday night, at the Bradys Landing restaurant in Houston.
Over 100 persons attended the gala evening, hosted and emceed by Fire Chief Harvey Little. Recognition was given for longevity, and the top award for Firefighter of the Year was presented to Mike Carsner, chief of Station No. 2, on a vote by the membership of the department.

In his prepared remarks, Chief Little reviewed the accomplishments of the department for 2010, and the goals for 2011. Due to a steady revenue stream from the 2 cents sales tax, the department was able to pay off debts on three fire trucks, and ordered a new Rescue Pumper to be delivered in 2011. Also purchased was a new fire chiefs car to replace the old 11 year old suburban.
Also noted by Little were improvements in the radio system, a light tower on Engine 27, receipt of a Forest Service grant of $155,000, and the start of a 24 hour duty crew at Station 2. Little expected in 2011 to retire the debt on two vehicles, and use the grant to purchase a new Tanker. An ISO insurance inspection is scheduled this year, which should lower rates for local residents.
Chief Little noted a decrease of 17% in total calls for the year, although 23 LifeFlight requests was the same as the previous year.
Membership of the department is now full, with 34 regular members, 1 EMS and 18 part time paid. Little had a class of 17 new members this year, which was expanded from previous years due to the acceptance of out of area applicants.
Special recognition was given to the Department Chaplain, Rev. Phillip Morris, and the board of HCESD#14, which was present.
Also recognized was Patrick Brown as Rookie of the Year, and Mike Carsner as Firefighter of the Year. Rookie of the Year is given in memory of William Taylor, an HVFD firefighter who passed away suddenly in 1999.
See other awards on Page 2.