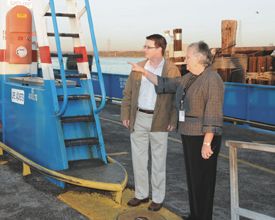 LYNCHBURG The second of the two boats at the historic Lynchburg Ferry left her berth Friday morning to be fitted with a new clean-burning, energy-efficient engine.
When the William P. Hobby returns in about six weeks she will join the Ross. S. Sterling as 46-year-old boats that will be burning about 25 percent less fuel to operate.
Harris County Precinct Two secured $588, 611 in grant funding through the Houston-Galveston Area Council for replacement of engines on both boats to reduce pollution in the region.
Operation of these historic ferries in the most efficient manner fits perfectly with our emphasis on a leaner county government for the residents of Harris County, said Commissioner Jack Morman. We will work to provide dependable service with the least amount of strain on taxpayers pocketbooks.

The new engines are rated to save as much as 400 gallons of fuel per month for the two boats that currently use about 1,400 gallons monthly. Additionally, emissions of dangerous pollutants are expected to fall by as much as two-thirds.
The ferry service began in 1822 by Nathaniel Lynch, a private ferry operator, just below the confluence of the San Jacinto River and Buffalo Bayou. While already an integral part of the growth of Texas, the ferrys place in history was cemented by its proximity to the fateful Battle of San Jacinto in which Texians gained Independence from Mexican dictator Santa Anna.
Harris County, formed by the Republic of Texas in 1837, assumed operations of the ferry and established rates for crossing. In 1890, the county chose to eliminate any fees and the service remains free to this day.
Currently, each of the boats carries an average of 750 vehicles per day in the 1,100 foot crossing. Each vessel has in excess of 250,000 hours of running time in their lives. The Lynchburg Ferries are approaching 800,000 miles of combined travel.
The engine replacements are being done by Bludworth Marine on Harborside Drive in Galveston.