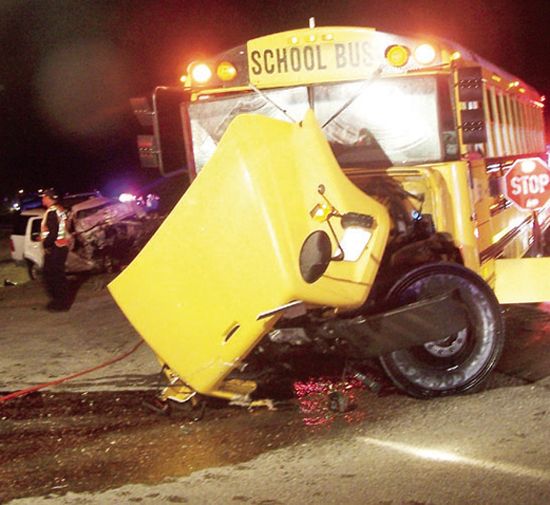 By LEWIS SPEARMAN
CROSBY – At about 8:40 p.m. on Dec. 28, a Mustang was turning left into the Tall Cedar Community at 19123 FM 2100 when a man driving a white Ford S.U.V. approached northbound and tried to pass the stopped vehicle by going into the oncoming lane as a Crosby ISD school bus filled with Crosbys Girls Varsity Basketball Team was southbound, according to eyewitnesses.
It was a fatal mistake for the S.U.V driver which also injured numerous students. Six ambulances of two girls each and a bus driver were observed loading, parents arrived next to take others home.
Crosby Volunteer Fire Dept. rolled most of their units. Fire Chief Alan Kulak directing rescue operations said, I hope the state will get busy putting in some turn lanes.


The license plate on the S.U.V. indicates the vehicle belongs to Mean Gene Kelton. A guitar and amplifier was onboard the S.U.V. Kelton, 57, was said to be on his way to a charity gig in Porter. Deputy Hughes confirmed it was Kelton, one of the top blues guitar players in Texas.
The impact of the crash brought all of the debris including the bus to just in front of Pookys Tavern. The owner, although he did not see the wreck himself, heard it. With a fire extinguisher in hand he ran to the aid of the S.U.V. driver inside a heavily smoking wreck. That is when Lee Machala, that owner, realized the driver was pinned in the S.U.V. He then thought about how to help get the children to safety from the roadside.
I am sick and tired of wrecks on this road. I have to watch 70 m.p.h. traffic on a road servicing all this side of Harris County with just two lanes. We have to take care of each other out here. I do what I can to keep my customers safe but we need some work on this road.
Deputies at the scene determined that Kelton had died instantly and may have been operating a cell phone at the time. The Mustang was simply waiting on oncoming traffic to enter the Tall Cedar Community. Perhaps the best decision would have been to choose the ditch and go right but there is often little time to react.
Team members, the coach, the coaches daughter, and the bus driver left hospitals that day.
There are turn lanes on FM 2100, mostly at county roads but private drives have no such lanes and the rate of injuries have increased dramatically since last year. The count according to officials is 12 fatalities since school closed last year.
Although the Precinct 3 Constables Office, Harris County Sheriffs Office and Department of Public Safety have increased patrols and are steady writing tickets on FM 2100 from U.S. 90 to Huffmans FM 1960.
The conditions of the road remains hazardous for the amount of traffic. Two single vehicle roll-over accidents at Old Atascocita Rd. at FM 2100 occurred on Dec. 12 and Dec. 18.
In 1998 the state legislature considered widening FM 2100 and upon said that the roadway needed the changes but voted not one dime to make them.
Subsequent proposals have been termed development driven initiatives. Whatever that means, it seems that development in Humble, Atascocita, Crosby and Baytown merit consideration of widening that roadway.
Local property owners are not wanting to acquiesce another 8 to 16 feet of right-of-way but they do not want to endanger their families either. Jerry Eversole urged the community to demand of the state to widen FM 2100 two years ago.
This is not the beginning and it is certainly not the end. Currently, the state is to complete the Crosby Freeway in April of this year. Construction of the Overpass at the railroad pass is to begin in February. A traffic snarl begins at 6:00 a.m. and 6:00 p.m. now on FM 2100.