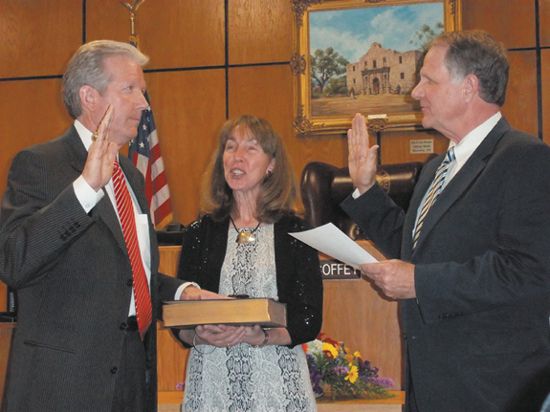 BAYTOWN On Jan. 3, Judge elect Don Coffey was sworn in to become the new Justice of the Peace for Precinct 3. He is replacing the retiring Judge Tony Polumbo who did not seek re-election after having served for 20 years.
Congressman Ted Poe administered the oath of office at the courthouse on Baker Rd. in Baytown. I am honored that Congressman Poe agreed to come swear me in on Monday. As a former Harris County District Judge and now my Congressman, he is the ideal person to start my career as a new judge.
Coffey was elected in 2010 after receiving seventy-nine percent of the votes in the run-off election to serve as Justice of the Peace for Precinct 3, Place 2. He was born and raised in Baytown and has been married to his wife, Jenice, since 1978. They have one son, Stephen, who is attending Washington University School of Law.
Coffey has practiced law in Baytown since 1993 and is the past president of the local bar association. Prior to becoming an attorney, he worked in the Texas Senate while attending law school.

EAST HARRIS COUNTY–Deer Park resident Jack Morman was sworn in as the Harris County Precinct Two Commissioner Saturday morning in a ceremony at the countys Civil Courthouse located at 201 Caroline, 17th Floor, in downtown Houston.
The lifelong Precinct Two resident was sworn in by Harris County Criminal Court Judge Natalie Fleming.
He was surrounded by family and constituents, including his wife, Andrea Moreno Morman and their children, daughter Jordan and son Jack III (ages 3 and 2 respectively).
I will bring a positive attitude of cooperation and community involvement to Precinct Two, Morman said following the oath. We will continue to provide essential services while meeting the challenge of reducing spending and eliminating waste. Every resident will know that every tax dollar is spent wisely.
Morman is a graduate of Baylor University and Baylor University Law School and is licensed by the State of Texas to practice before the courts of the State of Texas as well as the U.S. District Court for the Southern District of Texas.