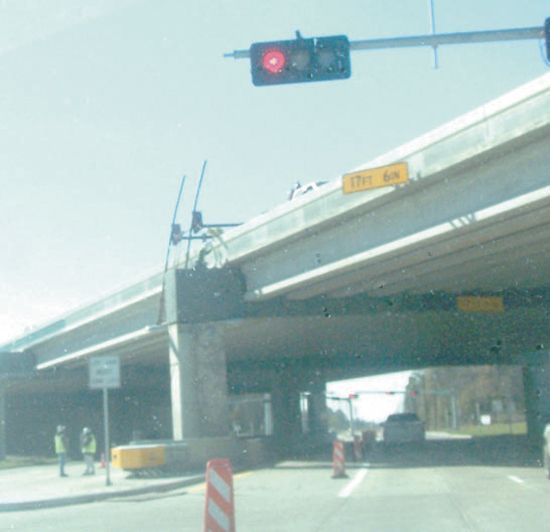 By LEWIS SPEARMAN
CROSBY  The Texas Department of Transportation (TXDoT) indicates that the Crosby Freeway may be opening soon as local officials show concern.
State Representative Dan Huberty R., District 127, and Crosby ISD Superintendent Dr. Keith Moore met with TXDoT officials on Jan. 7 to discuss fatalities on FM 2100 and potential action to widen that roadway when it was mentioned by TXDoT Officials that the Crosby Freeway was to open in a couple of weeks.


During an interview with Dr. Moore and an e-mail exchange with the already-accomplishing freshman legislator, it was learned that even when TXDoT receives the go-ahead funds for a roadway expansion it generally takes upwards of six years to begin driving on that road. Those who have lived nearby longer probably are more than familiar with that fact, since U.S. 90 was proposed in 1970.
Dr. Moore expressed that fatal crashes including one of students last May and on Dec. 28 with a school bus being involved concerned him both as an educator and as a father.
However, TXDoT Engineer Frank Mayfield at the Design Center said that the roadway will not be finished until late March or early April. It may be true, that the roadway is opening next week, but that is what I am sticking to. But if we open up earlier then so much the better.
Manager Jeff Volk had stated that completion of the Crosby Freeway has been slated for April 6 of this year since he had begun working on the project years ago.
Diedra Samuals is TXDoT’s Public Information Officer for this area. She is in the process of sending out invitations to a Jan. 21 ribbon cutting for both lanes of the roadway. She added that the lanes would be open the following day for traffic.
One explanation of the seeming contradiction inside the agency is that terms used may be interpreted to indicate that the frontage roads may be opening sooner but the Freeway in total may not yet be completed until the scheduled dates in late March or early April.
On Tuesday, workers were tending the main beam of the last bridge to be constructed at Maxie Road in North Shore.
The meeting between the Superintendent and Dr. Moore was with TXDoT’s District Engineer Douglas Stephens for Northeast Harris County about conditions on FM 2100.
Currently, with the exception of the overpasses of Runneburg and Krenek Roads, and some extra turn lanes on North FM 2100, the local roadways are much the same as they were 12 years ago and the situations have changed. Where some 1,200 vehicles traversed FM 2100 daily then, over 2,000 do now, according to TXDoT studies.
According to Captain Jack Hagee of Ken Jones’ Precinct 3 Constable’s Office 1,045 citations have been written since Nov. 5 of last year by that office alone on FM 2100 from IH-10 to the Montgomery County Line on FM 2100. Hagee says that most have been written North of U.S. 90, the real problem is in the North toward Huffman from Crosby. We are going to just keep working traffic until it turns around.
He points to the coincidence of 465 tickets written in both November and December.
That however does not solve the necessity of a wider roadway to weave inside before they come in contact with those of us just trying to go home, to school or to work for speeders, drunks, and cell phone users of the talk or texting variety.
Huberty, who was just sworn in last Monday, set up the meeting with TXDoT the Friday before. Huberty wrote, After the recent increase in accidents on Farm to Market Road 2100 from Huffman through Crosby, I would like to see what can be done to decrease the amount of incidences on that stretch of road.
Huberty indicates that the number of crashes has increased from 83 in 2009 to 132 in 2010. From that, a decision was made to install a traffic light at the intersection of FM 2100 and Stroker Road, as well as, a flashing light at the intersection of FM 2100 and Spanish Cove. Although this will address some of the issues, I feel it is important to remember the other areas of that road.
This follows on the heels of a TXDoT Restructure Council report that the agency has ongoing problems with transparency and accountability at the agency as reported by the Grant Thornton external audit.
The impending threat is that in the current economic situation it is possible that funding for transportation projects could be adversely affected. If the Texas Legislature, facing a $15 bullion shortfall before annual increases, has to force changes some observers believe the State may defund or delay needed projects to re-organize the agency.