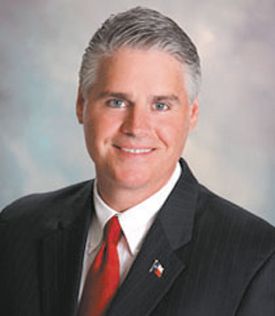 By LEWIS SPEARMAN
CROSBY  The local school superintendant announced a meeting concerning local roadways to be held at the high school gymnasium on February 17 at 7:30 p.m.
Dr. Keith Moore said We are going to have a public meeting with Texas Department of Transportation (TXDoT) and Representative Dan Huberty in regards to FM 2100 and to discuss the bridge. Our main concern is the safety of FM 2100. I would like to ask local residents not to leave these matters in the hands of someone else even though they work hard and at the end of the day may be tempted to let someone else speak for them. I think we need for them to show up and show that we are concerned, not to scream and holler but show that it is a concern for the entire community.
Rep. Dan Huberty, R. District 127 stated, Our hope is to get it [widening of FM 2100] funded.

In the mean time its all about funding. Like getting those traffic lights up at Spanish Cove and Stroker Rd. Its all about buying the rights of way and get the project let. Were having this symposium to talk about what we can do now and the future.
Huberty indicates that with the completion of US 90 to IH-10 and IH-610 there is more urgency to communicate with the community about roadway changes and traffic flow.
According to Captain Jack Hagee of Ken Jones Pct. 3 Constables Office, in the month of January 589 citations have been written by his traffic patrol division on FM 2100. On Feb. 5 the patrol wrote 24 tickets and on Superbowl Sunday they wrote 21 tickets.
TXDoT officials recently announced that the project to build an overpass of the Union Pacific Railroad tracks on FM 2100 is currently being worked on by utilities but that construction is to begin in March. Indications from engineers is that the first move is to build a service road of one lane of traffic to go over the railroad tracks on both sides. Then plans are to begin working on the Overpass on the extant roadway. The project let in July but the contractor will not begin until the utilities have come into compliance. The contractor has not yet determined where construction will begin. TXDoT officials have promised to inform the commuity of closings of roadways and side streets once the project has begun.
Congressman Ted Poe, R., U.S. House District 2, said of FM 2100, FM 2100 is long overdue. It has been on my wish list for a long time.
Congressman Gene Green, D., U.S House District 29, indicates where the funding crunch for highways began, On the State level the gas tax is the same since 1990 on the Federal level since 1993, the cost of construction has gone up….Funding transportation to keep up with our growth is a crisis on the state and federal level much less any plan for our future so it is something the state legislature and congress has to deal with. No one wants to increase taxes but now the gas tax is about 5 or 6¢ per gallon as it was back then but we tried to pass a percentage on the gas price of 5 or 6% so that with inflation the funding would be available to build the roadways that we need for safety and mobility. That is hindsight but the ear marks for funding for highways now is nothing compaired to the current need.
The Crosby High School Gymnasium is inside the Commons of the main building.