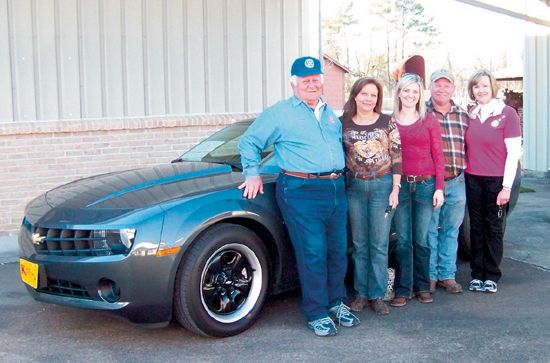 HIGHLANDS Chester Stasney not only is a good Chili cook, he is followed by good luck. He sold two winning tickets in the 36th annual Rotary Club Chili Feast, including the grand prize winner of the new 2011 Chevy Camaro car.
Chester sold the winning 1st ticket drawn, and also the 600th ticket drawn, which had been purchased by Terri Hotchkiss of Baytown. Terri and her family were thrilled to get the phone call that they had won, but like many prize winners in the past, had a hard time believeing that it was true.

Chester said this was a common feeling, He should know, he has sold several winning tickets before, and probably will be sought out in the future by those who want some of his luck to rub off on them.
Good weather and an improving economy brought out almost a thousand people, a larger than usual crowd to last Saturdays Chili Feast.
Chairwoman Denise Smith said that with the live and silent auctions, this will probably be the best year for the fund raiser. She pointed out that the monies raised are used by the Rotary Club for community events, scholarships and many safety projects locally. Last year the club was able through this event to return over $50,000 to the community, making everyone a winner.
Club members were assisted by the GC Memorial and Chinquapin Interact club members.