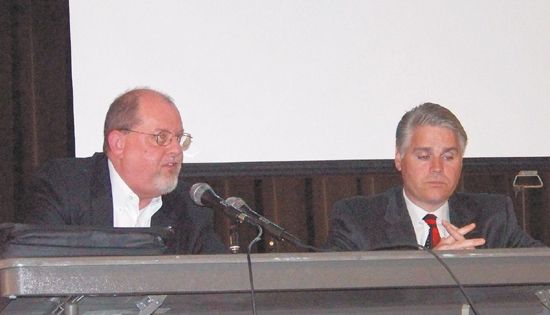 By GILBERT HOFFMAN and LEWIS SPEARMAN Star-Courier
CROSBY A town hall meeting that combined State Representative Dan Hubertys first public forum, and the school districts report on the school budget, was held last Thursday night at the high school auditorium. Several hundred people turned out, and although the crowd was civil, they voiced quite a few concerns about TxDOTs current plans for improvements on FM2100, and what the reduced school budget will mean to teachers jobs and classroom instruction quality.
Both TxDOT and Crosby ISD expressed concern that reduced funding from the state would greatly curtail what they could accomplish.

For instance, a much discussed widening of FM2100 from Crosby to Huffman, with left turn lanes and other safety features, is not going to happen in the near future, District Engineer Delvin Dennis said. Construction costs of $25 million, and land acquisition of $15 million put this project far into the future, he said. Dennis did say that some minor safety improvements would be implemented between now and September, and a study would attempt to lower the speed limit from 55 mph to 50 mph.
When Rodney Foster pointed out that as many as 16,000 cars a day use this stretch of road, Dennis compared it to FM1960 with 60,000, saying it was a much more serious problem that he was dealing with.
Several residents of Jackson Bayou, and Gena McMillan, who has a business on Kernahan, expressed concern about access to their properties when the railroad overpass is built. The TxDot engineers said that temporary widening would allow some access, but that other roads with alternate access would be blocked, but just for a few days. McMillan was not satisfied with this answer, and asked the public to contact her on her new website, www.visitcrosby.com.
When mention of the new US90 was made, the audience burst into applause, and some told of the time saving this has meant to them.
School Finance
Huberty made the point about choosing between Needs vs Wants. He made the point that Texas does not have any money, and road and school budgets will be affected. The Legislature is now trying to fix a $27 billion dollar shortfall.
He said that in March the state Comptroller will issue a new revenue forecast, and the Legislature must spend no more than this. However, the economy seems to be recovering, and sales tax collections are up, 11% in January for example.
Huberty expects that the state will pull $3.5 billion from their Rainy Day fund to help with school financing.
As a prior school board president, in Humble, Huberty said he has a passionate approach to education, and will be working on minimizing the funding cuts.
Superintendent Moore pointed out that Crosby ISD has already taken a number of budget reductions, and they are now working on a budget for 2011-2012 that will be finalized when the states contribution is known, probably in August.
The current Crosby ISD budget is $39.5 million, and this will probably have to be reduced by $3.9 to $5.3 million, Moore said.
For certain, Moore said, The cuts will be uncomfortable.
Because of the arcane funding formula that the state now uses, the only way to get more money for your budget is to pass a tax increase.
Moore said that to save money, the administration staff is working fewer days, i.e. this is a salary reduction; reducing all travel; using resignations and retirements to reduce staff; and looking at job sharing as a possibility.
Huberty and Moore said that there will be another Town Hall meeting at the end of March, at the Newport Elementary.