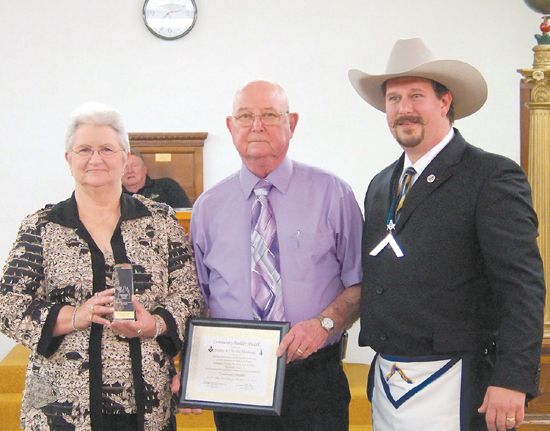 By GILBERT HOFFMAN Star-Courier
HIGHLANDS Sampson Masonic Lodge No. 231, annually honors a local citizen or group with their Community Builder Award for outstanding service to the community. This year, the award went to a couple well known in the community, Claudia and Bobby Birdsong, for their involvement in numerous civic causes and organizations.
The award was presented to the Birdsongs by Worshipful Master Christopher Watson, in a ceremony held last Saturday afternoon at the Lodge, attended by family, friends, and Masons.

Watson and members of the community that know the Birdsongs well spoke to the audience about their history of service to the community, and the friendliness and warmth they show to all. Speaking of their appreciation of the Birdsongs were Pastor Tim Edwards, Fire Chief Harvey Little, as well as Watson.
Several audience members also made comments, the one most often heard was Claudia is the best cook in Highlands!
Tim Edwards spoke about their service, reminding the audience that Jesus said the greatest is the one who serves. He recalled 14 years of Claudias service to the First Baptist Church members, taking care of people. He also noted Bobbys long service as a coach and sponsor of the Little League and Highlands Sports Association.
Harvey Little recalled what great neighbors they are, as well as Bobby as a hunting friend, and colleague at the fire department.
In his comments, Worshipful Master Watson noted that Claudia had served at the Church since 1986 as church secretary, headed the Food Pantry, supervised the Thanksgiving and Christmas baskets for the needy, and Share your Christmas for local school children. She kept in touch with local groups, such as Rotary, Sampson Lodge, area churches, and Pilot Club for needs of families in the community.
Watson said that Bobby had retired from Lyondell Chemical, and been a Deacon at First Baptist Church since 1986. He has been a volunteer fireman for 17 years, serving as Assistant Chief and responsible for maintenance of the department vehicles. He partipates in the Fill the Boot Campaign, and annual HVFD BBQ. Bobby had worked with area boys and girls for many years coaching baseball and softball, and for 5 years has been Assistant VP of the Pony League baseball team.
The Birdsongs family was present at the ceremony, including children Cindy Wilingham with husband Eric and their 2 children Courtney and Tyler; and son Billy with wife Melody, and their 2 children Logan and Morgan.
After the awards ceremony, the attendees gathered for a social occasion and refreshments in the Sampson Lodge Building.