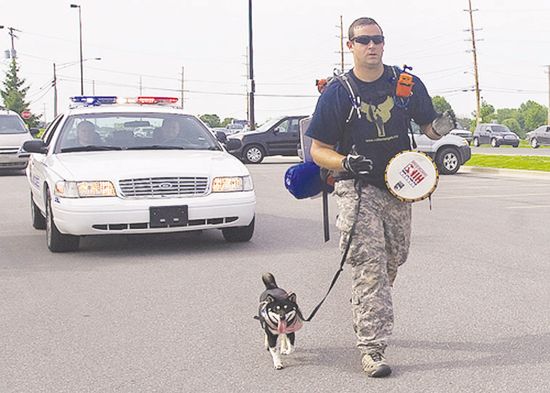 By BOBBY HORN JR.
CROSBYWhen Iraq War veteran Troy Yocum visits Crosby next week as part of his 7,000 mile-hike across America, he will not be alone.
Drew Intermediate student Hannah Thomas will be walking alongside him.
Thomas has raised more than $300 for Yocums Hike For Our Heroes.
Hannahs mother Kelly said that Hannah had been following Yocums story online for some time. Then she decided she wanted to help make a difference. We have Marines in our family, Kelly said. And we have always supported the military. She (Hannah) just wanted to do something special.

Making up flyers and letters, Hannah began soliciting areas businesses, the fire department and EMS. Pledges began to arrive.
Community service is nothing new for Hannah, who picked up the lesson at home. Her mother said that each year the family provides gifts and food for families at Christmas. While Hannah has helped in her familys community service, her mother said this is the first time she has taken on a project like this by herself.
To thank Hannah for her support, Yocum has invited her to join him on his hike. Kelly said that Hannah would meet Yocum at the intersection of Hwy. 90 and Beltway 8 on Feb. 21 at noon. The pair will then walk to Crosby, ending at the high school around 4 p.m.
I would love to see the people out on the streets cheering and supporting them as they walk down 2100, Kelley said.
The day does not end at 4 p.m. as Yocum hopes to put Crosby in the record books.
SFC Tim Meadows, Army Instructor, Crosby High School JROTC said that
supporters will attempt to break the Guinness World Record for the largest group to run a race barefoot. The current record is around 306 people. The distance to run is 100 meters.
The Barefoot Race will start on the football field at 6 p.m. All runners must be barefoot; it will be a mass start.
T-shirts will be sold at the stadium prior to the walk.
All proceeds will go to Wish Upon a Hero Foundation (www.wishuponahero.com). These funds are used to help military families in need.
Spectators will be encouraged to donate as well. Those in the race can have people sponsor them in the race for more donations. People can even donate online between now and the event.