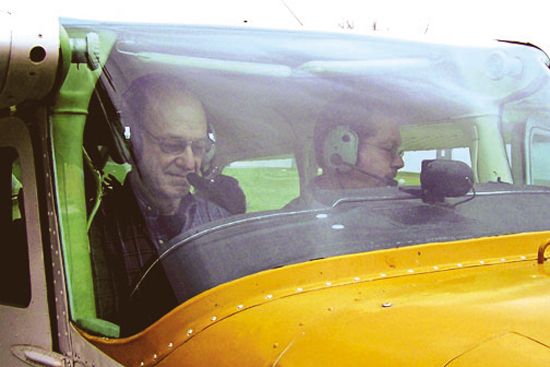 By LEWIS SPEARMAN
CROSBY  Oh, to slip the surly bounds of Earth with ones craft under ones own control, was a wish come true for a local man last Saturday as he made a list of things he would like to do as he faces Cancer and having decided not to undergo treatments again.
His daughter Connie summed it up concisely, My dad told me last year that on his bucket list was to build his own boat and to fly a plane. Im a hair dresser so when you when you sit in my chair you kind of tell me everything. About 2 weeks ago the doctor told us he has 6 months to live so we decided to make it happen.

My brother asked me then what would I do if he lives another 5 years, then what are you going to do?
According to Terry Dunham, This is a private field and his daughter found me on the internet and asked if we could take care of getting her dad a chance to pilot a plane. Im a Cancer survivor myself so whenever I get a chance to make something good happen for someone in that condition, I do my best to make it happen.
Wife Sharon made introductions to the Hite clan, Our sons, daughters, and grandchildren are all here for support, just a couple of our step sons could not make it.
In a few minutes conversation with Carl or his sons, Carl Jr., or Michael almost anyone feels right at home – the jokes flow and the observations are couched in humor. With young and old around there was a festive atmosphere to the airplane flight even if the overhanging clouds did not see fit to provide ideal flying visibility. Hite worked for a couple of papers back in the 1950s including the Conroe Courier, has the low key, down home affect mastered.
After a talk about worst case scenarios from Pilot Bossler, the daughter that arranged the flight and granddaughter Amy boarded the plane following Carl and the flight began.
Upon return, Hite stated, Flying is something I would do a lot more of if it was always like that. We went out to Hawaii and that was the worst trip I ever took, nothing but sitting for 7 or 8 hours and we did not have the best seats on the plane either.
Of the overcast flight itself he said, We went to Liberty then Mont Belvieu and took off again. We came back across Connies house, wiggled our wings there. Got a picture of her house, I told her I could have got that picture off of Google Earth and closer.
He smiled after the teasing, It was a good trip. I didnt land. It would have been ticklish but Id have tried it.