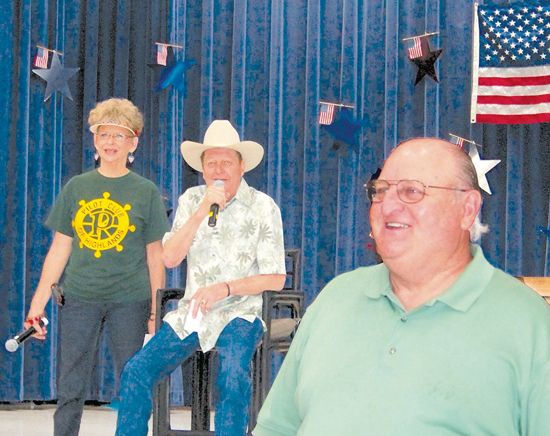 By GILBERT HOFFMAN Star-Courier
HIGHLANDS Stand Up for Pilot was the American patriotic theme that carried through most of the Community Fair that the Pilot Club held last Saturday, February 26.
The event at the Highlands Elementary School was the 13th year for this all-community celebration and fundraiser.
The all-day event opened at 10:30 a.m. with a patriotic song by Patricia Brockinton, presentation of the colors by the Crosby Jr. ROTC Color Guard, and introductions by Pilot Club president and Fair Chair Jana Jones, Miss Highlands Alli Little, and Jr. Miss Highlands Kendyll Reznicek.
Entertainment during the day was provided by Sparky of the Crosby Fire Department, singers Selena Shoemaker, Patricia Brockinton, and the Our Voice childrens chorus, dance numbers by Super Moms, and skating by Princes Roller Rink. Emcee for the event was Scott Cliff, and food was cooked by the Henderson Cook Team and served by the GCM students.

Door prizes were won by the following:
iPAD by Raymond Clements;
Pressure Washer by Bruce Filkins;
Gift Cards by Eric Raggio.
The Split the Pot was won by Brent Stallings.
Bicycles were won by Tori Gonzalez and Auggie Dilworth.
Outdoor games and exhibits were provided for children, including basket shoot and a new Spiderman moon walk.
Highlands Fire Department had equipment on display, and a booth inside, as well as the Higlands Heritage Project, Constable Mike Parson fingerprinting, Harris County Precinct 2, and many other commercial exhibits and crafts booths.