Suspects chased back to Crosby 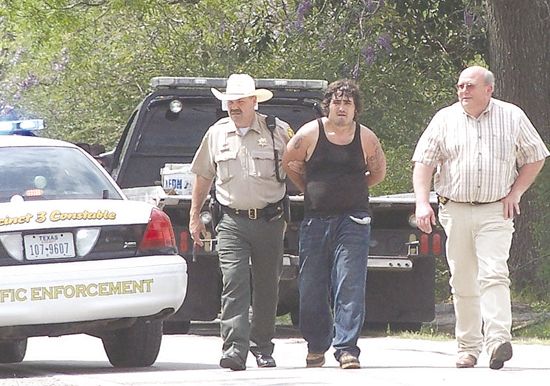 By LEWIS SPEARMAN
CROSBY A chase from the Eastgate area just over the Liberty County Line South on U.S. 90 led law enforcement down Runneburg Rd. at high speed around 1:20 p.m. last Friday.
Liberty County Sheriffs Office increased patrols near the border after numerous complaints of homes being burglarized and copper thefts recently.
A patrol saw four men in a dark truck leave a house later reported burglarized early morning March 25. A suspicious dark blue pickup spotted around 1 p.m. that day is believed to have been related to that burglary of a home on C.R. 6021.

When the deputys top lights came on so did the chase. Harris County Sheriffs Deputies and Precinct 3 Constables Deputies got involved once the county line was breached.
At high speeds past the churches that had their air conditioners stripped for copper, the school administration building that lost air conditioning units to burglars, the kindergarten holding Crosbys most precious treasure, past the barber shop that had been hit for an air conditioning unit just over a week ago, the stop sign and the dead end sign as Runneburg splits at two homes before hitting the railroad tracks a dark blue crew cab Silverado streaked with sirens and patrol cars right behind.
According to Magarette Wheddon, who was playing and chatting with her granddaughter on her porch, About the time we sat down I heard sirens coming way down and I thought they are getting louder and louder. By the time I thought that, they were in the yard here. A black, navy blue trucks doors flew open with the law right behind them. I saw 2 go on one side of my neighbors house and the other run past the left side of her house and the law pulled up blocking the way of another. I saw the law pulling their guns so I opened the door and yelled to my granddaughter, Run to Papaw. I got the door locked and kept watching as cars went up and down the railroad tracks. We heard helicopters flying nearby and just stop in midair. Finally, I got the attention of one of the officers, he was from Liberty and he said they had got them all.
When the truck stopped The doors flew open and they just barreled out. One of the law come out from behind the woods and caught one that ran closest to the woods. said Wheddon.
The helicopter flew near F.M. 2100 and Live Oak where a man in a black tee-shirt ran into a Precinct 3 Deputys Patrol Car. He was the last of four apprehended at 1:40 p.m., according to a neighbor. His description would match the one of the man that ran left of the neighbors house.
Another nearby house was being covered with crime scene tape and a detective was approached by the homeowner of the now yellow taped house, Why are you doing that? she asked.
Well, we believe they threw a gun nearby. said the detective.
Oh, she answered, I though I saw them throw something over here. and they walked directly up to a pistol, which the detective began to process.
The Liberty County Sheriffs Office indicates Clyde Perry, 24, William Richardson, 29, Joshua Warthem, 26, and Adolph Ramirez, 28, have been charge with burglary of a habitation and evading arrest. They were booked into Liberty County Jail.
Items like televisions found inside the truck were identified by the homeowner as having been taken from the C.R.6021 home.
Yet, another related local story concerns another truck that left its owners presence on Feb. 18 in the company of one of the suspects. It was recovered on March 25 in the Sundown Meadows neighborhood on Misty Way. That morning the trucks owner states she saw four men get into a navy blue crew cab and drive away, leaving behind the missing truck. As the woman worked with a Precinct 3 Deputy to recover the truck, dispatched called and asked the woman that reported missing the truck if one of the suspects by name had previously been in possession of the missing truck. She said she told dispatch he had, she was told that more patrols were on the way.
Mother and daughter had just returned from the truck recovery to Miller-Wilson Rd. as the truck the four men had gotten into zipped into the dead end area at the end of Runneburg followed by a bevy of law enforcement.
Small world, small town.