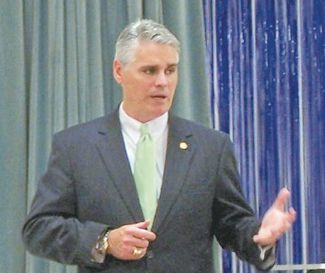 By LEWIS SPEARMAN
CROSBY  Representative Dan Huberty, (R-127), addressed local concerns at a meeting at Newport Elementary on March 26.
Although the meeting was not crowded it contained the notably interested in an efficient Crosby ISD. The meeting was opened by Dr. Keith Moore, Superintendent of Crosby ISD.
Huberty is championing efficient schools that spend about $6000 a year per student and getting good results as against schools spending in excess of $8,000 to $12,000 per student a year and getting so-so results.

He was once President of Humble ISD School Board and now is on the Public Education Committee. He also has been named to the powerful State Affairs Committee as a Freshman Representative.
Huberty shows a firm grasp of how the State came to have a shortfall in funding. Every tax base in the State went down. and The $12 Billion dollars that came from the one time Federal Stimulus was applied to the states long term debts.
Attendants were educated on the financial mistakes of the last session. The new business tax that was to generate $20+ Billion dollars in revenue actually brought in about $3.7 Million. The State passed a tax initiative that was to allow districts to roll back taxes or not with an incentive to be matched by the State for 15% more matching funds if the districts determined they need the taxes for schools. However the state is unable to meet that responsibility. Huberty indicates that by passing House Bills 4 and 275 it will generate about $4 Billion dollars for next year to be divided $2 Billion for education and $2 billion for health and human services.
Now just to make sure everyone is on the same page, Crosby ISD is trimming $3.2 Million from its budget in hopes that will be enough funds that the State will not be able to provide.
The worst case scenario that Crosby was looking at will not be happening. said Huberty with a glare of red-faced determination in reference to a reported $5.3 Million shortfall for Crosby.
He laid out a plan to take $3.1 Billion from the rainy day fund, get the state to start rewarding districts for efficiency and take the initiative to be more responsible with unfunded mandates such as the S.T.A.A.R. testing. He has authored a bill to put that change in the T.A.K.S. testing off until 20132014.
Huberty discussed the varied suggestions to make up for the current shortfall such as closing loop holes and reducing exemptions in the Senate and House budget arguments
Although he contends that the legislative process with regard to the budget is getting better day by day he also states that education is about $7 Billion on the bi-annum in the hole.
He focused on Crosbys situation being that there is low property wealth.
We are going to change how we fund education on a go forward basis in the State of Texas. The point is that Im going to fight to make the best deal for these efficient school districts.
Huberty has authored or coauthored 19 bills. He has filed legislation to repeal duplicate reporting in House Bill 1130, cutting redundancy and inefficiency in reporting the number of special education students in each district. The T.E.A. already files this with the federal government why go through the same expense twice.
House bill 868 would empower entities other than school districts to calculate the benefits of a roll back tax if they can get their constituent citizenry to pass it.