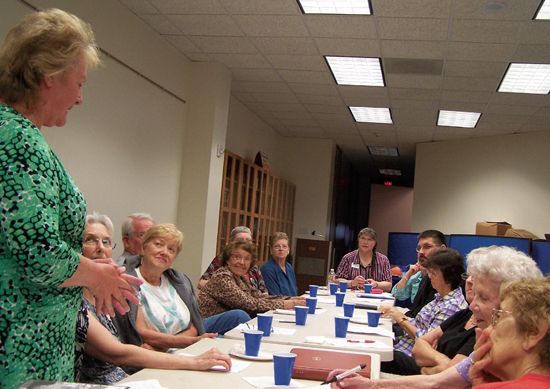 By LEWIS SPEARMAN
CROSBY  Dr. Keith Moore, Superintendent of Crosby ISD, spoke with Friends of the Crosby Library and help start Crosby Education Foundation last week.
On Monday, at the Crosby Library, Dr. Keith Moore and Mrs. Joanne Crawford of Crosby ISD School Board presented statements concerning a range of interests in the community.
Dr. Moore answered questions concerning how the local school district is reacting to the States budget shortfall and the operations of schools.
Crosby ISD is braced to handle a shortfall of about $3.1 Million even as it is meeting state requirements in testing. As of now, the district is planning to meet the demand for less faculty by not hiring to fill positions that will be vacated. This preparation is ongoing, out of necessity, although the Legislature has yet to come to agreement about how much that shortfall will be.

In surrounding districts hundreds of first or second year teachers are being laid off.
Although the staffing will be slightly smaller there will not be pink slips handed out to entire sections as elsewhere.
Currently it is believed that the impact may even be less than the $3.1 Million, possibly as little as $2.3 Million is being projected.
One of Dr. Moores initial programs was to focus on updating re-mediation programs including Mathematics with the aim of reducing student drop out rates at the High School.
Local schools are working with the unfunded mandates in education that has moved the district to spend about 56 days per year working on testing of varied types.
The hard part in talking about testing is, I believe, the accountability movement is a good thing, it frustrates me because it is not a perfect system. I believe in the past there were a lot of kids being ignored and a lot of poor education was being shuffled under the carpet before every kids was being measured in their development by testing. This is the last year of our current testing system. Next year they will be implementing the new STAR and of course Exams. One of the concerns is that of 180 school days 45 of those there will be testing of some kind going on, that is 25% of the school year. That is just State mandated testing that is not six weeks tests or any of the course related tests. So of those 135 remaining days some of those are going to be six weeks test, assembly, picture day and everything else so that those 135 end up being about 120 or 115 days of instruction. It is a big concern and ends up being expensive as well. On every campus Ive been on when someone is testing, they must be isolated in a quiet environment and it interrupts the entire day and makes it more difficult for the rest of the school to operate. Im not one to dodge accountability but when you add that many days of testing it does take from instruction.
There are some local districts that give about $1500 more per student than Crosby ISD but it is easy for me to be proud of running a more efficient district but you have to look at what they are dealing with and what they are accomplishing. Ive sent e-mails to legislators saying I understand that you have to cut education but it does not make sense to cut those that are already lean. You need to cut those that are already fat. They laymans example I give to my friends is that between my wife and I if you say we are gong to give you a reward if you lose 10 pounds I have the advantage because I weigh so much more than her. So how can you expect a school district to cut that is already lean against those that spend more per student. I am happy to say that what I have seen thus far the legislature is addressing that issue. The bill that I saw implemented before is called target revenue, that is a complicated system and it is how schools got funded about 6 years ago. The latest bill that I saw indicated that the legislature was going to eliminate target revenue, I think, by 2016. I give the credit for our viability to our school board I think there are very conscientious members that have been very careful of how funds are spent. We have a very student conscious and budget conscious school board. I think Crosby has made the hard and sound decisions. said Moore.
The Crosby Education Foundation. The President is Earl Boykin and the Superintendent is Secretary. It is a nonprofit organization to be the vehicle in the community to support the schools. There will be fund-raising and participation with the intent of bestowing those funds only to the schools. The goal is to work in partnership with the schools to see that they have common goals.
Currently there are 24 members. On May 3, there is to be a banquette to honor the top 5% of students. Next they intend to pull off getting a grant to reward innovative teaching methods. Memberships are still available for those interested in working with the district for better schools.