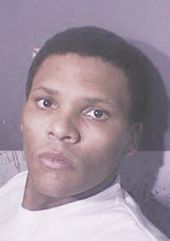 MCNAIR Police are waiting for an extradition order to bring back a man whom they say gunned down a McNair man while they argued on a public street.
On April 21, Yantsey Gonzales, black male, 33 years of age was charged with the murder of Eric Allen. Gonzales is believed to be confined to a wheelchair, due to injuries sustained from a previous shooting incident.
According to the Harris County Sheriffs Office on April 20, at approximately 6:05 p.m.., deputies with the Harris County Sheriffs Office responded to a shooting in the 2700 block of Waco, in McNair.
Upon arrival, deputies discovered a 22 year old black male, identified as Eric D. Allen, shot to death in the roadway. Witnesses advised that a white Ford Edge (SUV), driven by a black male, stopped in the roadway.

The driver was later identified as Gonzales.
Allen, approached the vehicle on foot and argued with the driver. Investigatiors believe Gonzales produced a pistol and shot Allen, one time, killing him.
Gonzales then fled the scene in the Ford Edge.
Deputies determined the Ford Edge was a rented vehicle and displayed Texas license plate # BF1P512. The Ford Edge was been entered as a Wanted Felony Vehicle.
On April 22, at approximately 3:30 A.M., members of the Gulf Coast Violent Offenders Task Force (GGVOTF) and the Calcasieu Parish Sheriffs Office, arrested the defendant, Yantsey Gonzales, at a motel room, in Sulphur, Louisiana. Homicide investigators with the Harris County Sheriffs Office Homicide Unit traveled to Sulphur, where they interviewed Gonzales.
The suspects vehicle, a white Ford Edge, rental car, was recovered from a residence in Sulphur. Gonzales is currently being held in the Calcasieu Parish Jail, on the murder charge, and is awaiting extradition back to Harris County, Texas.