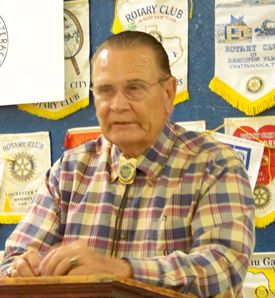 HIGHLANDS Speaking at a recent Rotary luncheon, Harris County Pct. 3 Constable Ken Jones outlined the problems that his office has had with a reduced county budget, and what steps he has taken to preserve jobs and keep service standard close to normal.
Jones said that the county cut all constable budgets, and his went from $12 million to about $10.5 million. He has had to reduce work hours and cut purchases of new equipment such as 11 patrol cars. However, he has not had to fire any employees in his department, unlike some other precincts who have lost as many as 100 deputies.
Jones says that he has been able to maintain patrols and other services through the dedication and hard work of his staff. He now has 85 deputies at work. Citing recently developed crime stats (see box) Jones noted that the criminals know about reduced staffing. Since March, when staff hours were reduced, crime calls have increased up to 16 percent. But, says Jones what counts is how many crimes you solve, not how many calls you answer.