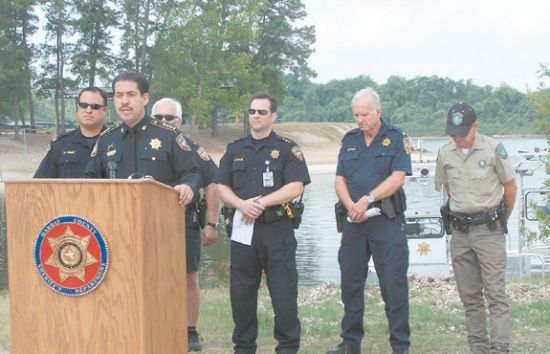 CROSBY  Sheriff Adrian Garcia visited Loves Marina last Friday to discuss boating and water safety prior to the Memorial Day weekend.
For the past several years the Harris County Sheriffs office has held a conference at Loves Marina to advise the public about water safety, although this year three persons have drown, that is significantly less than the eight that died in water related incidents by this time last year.
On hand were Chief Kevin Maples of the Reserve Unit, Marty OBrien, Major Holman, Lieutenant Stanton, and Game Warden Kevin Creed.
According to the Sheriff, Marine Safety has become paramount on local waterways and his department will conduct any means necessary to maintain safety of these waterways. All of these drowning here could have been prevented.

We want all of the residents and citizens of Harris County to have a safe and enjoyable summertime. All those who are coming out to these waterways should remember that when you are operating a boat or water vessel that the same type of care, the same type of control and the same type of responsibility that we ask of motor vehicles is expected in the water as well. To often we have had many drowning. We ask the citizens to help us help them and follow the rules of engagement while they are in the water either as a swimmer or as someone navigating a boat. We want the people of Harris County to know that Harris County Sheriffs Office Reserve Marine Unit vigilant and on patrol in these water and will conduct any enforcement activity that they deem necessary to keep these waterways safe.
Harris County Sheriffs Office patrols the San Jacinto River, Lake Houston and Clear Lake.
During the last couple of years there have been several trying years. Of the 8 people that the river took lst year 5 were in or near the San Jacnto River and two water craft accidents that resulted in injuries. The Texas Parks & Wildlife and Houstno Police Dept. help patrol these waterways. It is imperative that we understand the rules of boating. Driver inattention is one of the primary causes of vessel crashes. Many happen at high speeds. In some cases alcohol and drug useage plays a role in crashes. Many who drown believe they are better swimmers than they actually are. Overestimating their ability to swim plays a critical role in most water deaths. Heat and exhaustion plays a critical role.