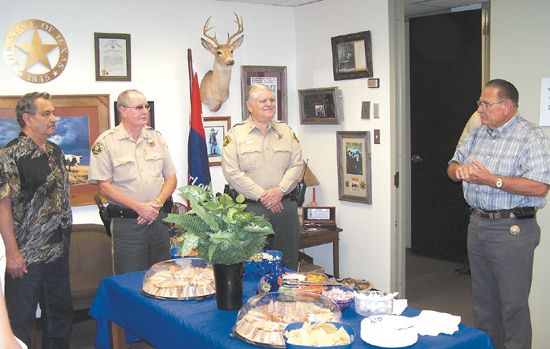 Constable Jones seemed to have doubts about wanting the trio to retire due to the nature of experience they offered to younger officers. I want to show my appreciation for the hard work you have done but for the dedication to the community and the department. as he passed out watches to the deputies on June 29.
Aguilar began with Precinct 3 back in 1993, Vern Miller has been a staple of stability for the Highlands Community since he joined the department in 1982. Jack Hagee had been with the department since Jones was a deputy having worked in many of the divisions. Each of the retiring deputies will serve in the reserves for the communitys benefit. Jones quipped, Now you can work without pay.
Jones remembered that Vern Miller had joked that he would enjoy retirement but bemoaned that he would have to drink coffee on his own time.

Aguilar indicated that the most rewarding part of the job for himself was working with kids. He had become a truant officer back in 1993 and Everybody I meet knows me over in Northshore.
He then worked as a baliff for Judge Mike Parrott.
Back in the day Vern told me that whenever you had to throw out a cigerette you did not have to roll down the window, just throw it through the hole in the floorboard. joked Aguilar.
Cake and snacks were provided for the retirement service.
Captain Jack Hagie had been with the department since 1980. He began in law enforcement in 1968 with Houston Police Dept. Airport Police for 8 months. He then went to work for Baytown P.D. following completion of February Police Academy and worked there for 7 and a half years. he then started his own business. He has headed departments and major investigations. He near the end was the press relations deputy and had distinguished himself in public relations.