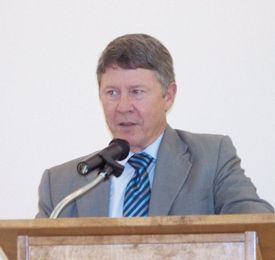 By GILBERT HOFFMAN Star-Courier
Members of the Highlands Chamber of Commerce heard the Harris Countys top administrator, County Judge Ed Emmett speak at last weeks luncheon on issues of importance to local residents.
Emmett started by asking how many in the audience remembered when he was the state representative in the Texas Legislature representing Highlands. The year was 1978 when he was elected, but no one in the audience seemed to go back that far.
This led to a discussion of how things had changed in 33 years, and what issues need attention, what to look for in the future, and what needed reform.
Emmetts talk focused on his leadership of the Harris County Office of Emergency Management, issues of transportation, the business climate in Harris County with an increased population, the need for health care reform, fiscal responsibilities with the county budget, and finally, what to do with the Astrodome.

As OEM head, Emmett has had to coordinate the response to several hurricanes and evacuations in the last few years, and he admitted that the county could learn from their mistakes.
Harris County now has 4 million residents, with each county commissioner responsible to about 1 million. He contrasted this to Loving County, Texas which has a population of 82. With 15,000 employees, the county functions as one of the largest government bodies in the nation. He suggested an efficiency study could improve it.
With so many people, transportation infrastructure is a major issue. Ships in the port are getting larger, he noted, and support systems to move cargo away from the port to the consumer must also grow. A problem here is that the TxDot budget by 2014 will be totally used for maintenance, not new roads and rail.
Health care needs to be regional, in one sense, and local with neighborhood clinics offering preventative medicine. Both of these approaches would be more efficient, he said, and stretch the healthcare dollar.
On the county budget process, he said it could be more transparent, and should be based on zero based budgeting not simply reducing current expenses and programs. Each expenditure should be justified before it is approved.
Finally, he led the discussion to the fate of the Astrodome. A show of hands in the audience indicated almost everyone was in favor of saving the iconic building, but Emmett said the problem is what to use it for, and how to pay for the improvements that are required. One use often mentioned is a Casino, but at present this is not legal or feasible. His idea for a use, is a Festival Venue for all our fairs and celebrations. This would be weather friendly. He said there are at least 80 of these every year that could be suitably housed in the Dome. However, studies show it would cost $300 to bring the building back to a usable state. Even so, tearing it down would cost $90 million. With no money in the budget for this, he said it would take a voter approved bond issue to revive the Dome. A study is currently being undertaken, and Emmett thinks a final decision will be made by the commissioners by the end of this year.