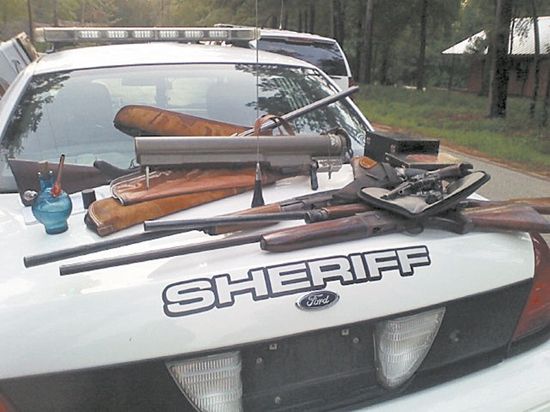 Deputies from the Liberty County Sheriff’s office discovered a huge cache of illegal items while acting on a Crimestoppers tip last Wednesday.
According to reports, late at night on July 27, the deputies headed to a location on County Road 389 near the Pebble Creek area of Liberty County. The officers intended to respond to reports of suspected drug deals, fighting and loud noises from the area, with individuals coming to and leaving the area at all hours.
When the deputies arrived, they discovered evidence of drug trafficking, including an undisclosed amount of methamphetamine, a marijuana growing operation, narcotics paraphernalia and currency.
Located also were a number of possibly stolen items, such as four-wheelers, motor vehicle parts and electronic devices.
The officers also found a stash of firearms, which included shotguns, semi-automatic shotguns, rifles, handguns, and a rocket launcher.
Authorities believe that this location was a place where criminals would trade and sell items for drugs and other items.