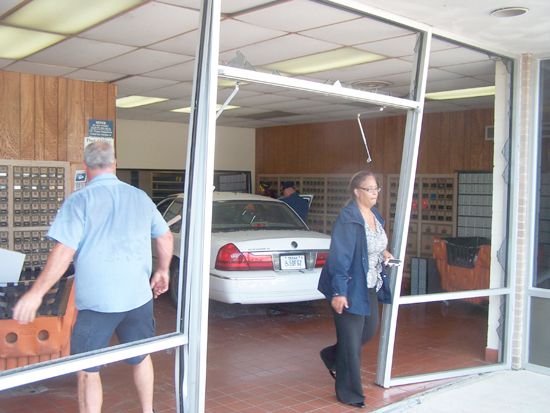 Its happened again! A Post Office Patron, Ms. Joe Lowrance, lost control of her car and drove into the lobby of the Highlands Post Office, severely damaging the front windows, doors and many of the post office boxes inside. The accident happened last Friday, October 7th at about 3:20 p.m. according to Highlands Post Master Anita Skillern, seen above surveying the damage. This is the third time in recent memory that an accident of this type has happened. Skillern said she expects the Postal Service to install guard posts in the future.

Injured in the accident was Ms. Pauline Cutbirth, a patron who was standing in the lobby, when the out of control Mercury sedan hit her. It was reported that she suffered a broken ankle and numerous contusions.

Highlands VFD transported Ms. Cutbirth to the hospital, where she was treated and released. Also in the car was a passenger, Ms. Sandra Wallingford, who reportedly was not injured. The Post Office is open for business, but plywood has temporarily replaced much of the glass.