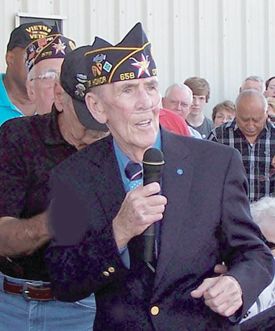 CROSBY  This area will hold ceremonies to recognize and celebrate the brave men that answer their countries call to battle this weekend. It is an event with the intent of healing what was left unhealed and remembering the wounds that cannot be healed.

The Vietnam Travelling Memorial Wall arrives here on Wednesday at 10:00 a.m., issued in by over 250 motorcycles and twenty five to thirty antique cars. The Wall will be open to visitation from 9:00 a.m. until 9:00 p.m. from Nov. 4 through 6. This wall holds inscribed the names of those that gave the last full measure for their country in the Vietnam conflict

A special dedication is being held at 5:00 p.m. on Nov. 4 to officially commemorate the local American Legion Hut to a Congressional Medal of Honor recipient, David H. McNerney. The details of the action leading up to his being awarded the Medal of Honor are on page 3 of this issue. The name of the hall will then officially be Crosby American Legion Hut David H. McNerney Post 658.

According to Gerald Blankenship a former president of the hut, It is a great honor for us to dedicate this building after one of our members who was a Medal of Honor recipient. He was regularly in attendance there. Even though he was in his seventies, he worked just as hard as anybody getting this hall ready so we could move in and start holding meetings. I think it an appropriate thing to do to honor one of Americas greatest heroes and my personal friend. This legion voted on the measure to name this hall after him and 100% of the members all stood up in unison and supported this. I think we are the only hut in Texas named after a medal of Honor recipient.

I am going to have a special display of the ribbons and medals that David earned during his life of service. This display contains items that have never been seen before. Visitors will see some great artifacts of that mans life. Blankenship added.

This recognition will be held inside the Hall. According to Blankenship, about 20 of the men that served with him are flying in for the ceremony.

Of the 59 surviving men that were at Poli Doc, South Vietnam that day when McNerney earned the Medal, 40 of them have moved their membership and joined the American Legion in Crosby. Blankenship indicates, This is their home because we have the recognition Wall in front of Post 658. They bought the flag pole. We have Davids Medal of Honor Obelisk, plus we have every name of the 108 men that served that fateful day with A Company on the wall that stands out front of our Hall including details such as all the killed in action, and survivors.

A special T-Shirt has been made for sale in recognition of the ceremony for $25.

That Friday at the Crosby High School Commons, a Community Fish Fry and Bingo will begin at 5:30 p.m. assembled by the Crosby/Hu-man Chamber of Commerce. The All-You-Care-to-Eat is being catered by Bayou City Catfish with a menu of catfish, shrimp with fries, hush puppies, cole slaw and iced tea. Tickets are $16.50 for adults and children under age 10 only $8.00.

A portion of the proceeds from this dinner will go to benefit veterans including the members of the local American Legion Hall and Crosby VFW.

The Travelling Vietnam Memorial Wall opening ceremony will be held Saturday at 9:00 a.m. Saturday at 10:00 a.m. a Parade will travel down Main Street from Crosby High School to the Crosby Community Center on Hare Road.

At Noon that day ceremonies return to the Hall as visitors view the Wall behind the building. Guest speaker Colonel Douglas H. Wheelock, a former commander of the International Space Station and former astronaut, will officiate ceremonies and deliver an oration.

Son Harvest Churchs Pastor Richard Amadour will conduct services on Sunday Morning at 10:00 a.m. at the American Legion Hall David H. McNerney Post 658. Amadour, a board member of the Crosby-Huffman Chamber of Commerce, and last years Citizen of the Year.

Closing Ceremonies for visitation will be held at 9:00 p.m. on that Sunday.