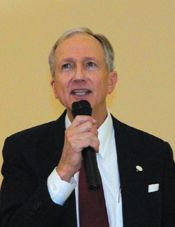 HIGHLANDS County Attorney Vince Ryan paid a visit to the Highlands-Lynchburg Chamber at their luncheon last Thursday. He reminded the large audience at the Community Center that he was running for re-election, in the primary and the November election, and then delivered a talk about county services that his office offers.

Due to budget restrictions, he has had to cut back his staff from 225 when he took office, to 175 employees now. About half of these are attorneys, he said. Because the workload has not diminished, he has had to find efficiencies for his office, including more computerization of records, and the use of private attorneys on contract for some cases. He is also studying the possibility of his office collecting back taxes, which would save the county the 20% they now pay to an outside collection firm.

His office is charged with advising county employees on the limits of government, in Texas and Harris County. Harris County is only one of four counties in the state with both a District Attorney and a County Attorney, due to its size.

Cases he is currently working on include the MERS suit, which charges banks with illegally processing mortgages without filing them with the county. This keeps the county from collecting millions in filing fees.

Another ongoing case is the Toxic Waste site in the San Jacinto River. Working with the EPA, his office is attempting to have all toxic materials permanently removed from the river at the expense of the two companies that originally dumped them there. They are also investigating a second dump site discovered south of I-10.