Election Season heats up as Early Voting opens on May 14th 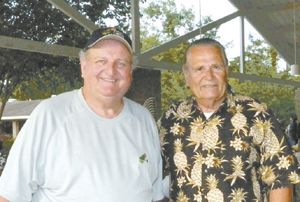 With the much delayed primary election finally set to happen on Tuesday, May 29th, and early voting starting for two weeks on Monday, May 14th, many office seekers and incumbents have turned their thoughts to campaigning and fundraising.

Lots of candidates, office holders, and friends and supporters showed up at the North Shore Rotary Pavilion, where the fajita dinner was held. About 500 were in attendance, and the food and the auction were well supported and went on for many hours. Judge Parrott is running for reelection to his seat as Justice of the Peace in Precinct 3 Place 1.

Parrott has held the seat since 1993, and for the first time he has an opponent in the Democratic primary, Latonya Marie Allen. There are no challengers on the Republican ticket.

Parrott says he is especially proud of the work he has done with the areas youth, making Teen Court a learning experience and tailoring sentences to rehabilitate the errant offender.

Parrotts teen court deals with 800 to 1000 students each month, and he judges each offender on an individual basis.

Punishment might be severe, but it is usually lenient, for he expects that most youth can be rehabilitated. Some sentences are for counseling, tutoring, community service, or classes in etiquette, or gang, tobacco, and alcohol awareness.