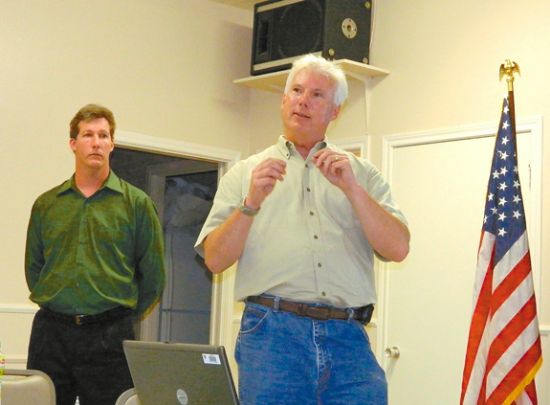 HIGHLANDS Almost a hundred persons packed the social hall of the Methodist Church last Thursday evening, to hear the latest information on the toxic waste pits in the nearby San Jacinto River.

Making presentations were the TexansTogether advocacy group, and representatives from the federal Environmental Protection Agency, Dallas office. The meeting was called by the ad hoc San Jacinto River Coalition, represented by Sarah Davis, Jim Stouhall, Gary Wiggins, and others. Davis reminded the group that they have regular meetings on the second Thursday of every month, with the next meeting on July 12th at 7pm.

Also present, but not speaking, were representatives of the state TCEQ, state Health Department, Harris County Pollution Control Services, and Harris County Attorneys office. Also attending were Scott Jones of the Galveston Bay Foundation, and their environmental consultant, recently hired, Jennifer Ronk, who will be advising them on technical matters.

This months meeting was especially relevant, because results of a new study commissioned by TexansTogether Education Fund (TTEF) were available and discussed. Mike Ruger presented a brief summary of the report, which had been carried out by Dr. Stephen King, a well-known and respected Houston area environmental toxicologist.

As reported by Ruger, Dr. Kings tests from September 2011 indicated that toxic levels of Dioxins and Furans had not diminished since 2005, even after the current containment cap had been put in place.

Based on testing of sediment, fish and oysters collected near the waste pit site, Dr. King recommended that wading, swimming, fishing, crabbing and collecting of oysters and crabs should be banned. In addition, aquatic life caught in the area should not be consumed, he said.

However, the presentation of current test results made by the EPA representatives differed from this study, and essentially came to a different conclusion. Donn Walters, Gary Miller, and Dr. Philip Turner of EPA presented slides and an analysis that indicated that their tests did not find any high level of toxins escaping into either the groundwater table or aquatic life, and no imminent health hazard. Levels of toxicity were deemed to be below those considered safe in normal environments, after the cap was put in place.

Miller said that EPAs information was based on 240 sediment samples, some as deep as 10 feet, and 30 fish samples from three nearby areas. Sixteen additional soil borings taken in early May have not had test results reported yet, he said.

Miller made the point that the cap is continually monitored, and if a problem showed it was leaking, it would be immediately repaired with stockpiled material. EPA said that the current schedule is for studies to continue into 2013, and an Action Plan to be drafted and implemented in 2014, which could call for removal of the material.

Asked why Dioxin levels are similar to 10 years ago, Rock answered that “it may take 10 years for big reductions. The Cap is only one year old. Dioxin is sticky, and takes a while to dissipate.”