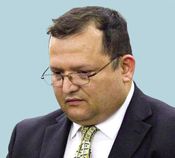 HOUSTON Raul Rodriguez, 47, faces life in prison after jurors convicted him of murder on Wednesday, June 13, two years after a May 2010 confrontation over a noisy party in a Huffman neighborhood that led to the shooting death of 36-year-old Kelly Danaher, and shooting injuries of two other men.

Prosecutors rejected claims of self-defense, using a 22-minute video Rodriguez made during the confrontation as pivotal evidence to describe him as a neighborhood bully who initiated the dispute. Rodriguez, irritated by the loud noise coming from the party, approached Danahers house with a pistol, a video camera, and a flashlight, which he allegedly shined in the victims faces to provoke them.

On the video, Rodriguez is heard telling the partygoers to keep the noise down, and later on the phone with the police saying his life is in danger. The video then goes black after Danaher and two other men approach him. There is a laugh, then a gunshot, then the camera falls.

Defense attorney Neal Davis argued Rodriguez only had a split second to defend himself after being charged by Danaher and the other men, one of whoms blood alcohol content was more than three times the legal limit. Davis maintained that Rodriguezs actions were protected under the Castle Doctrine, Texass version of a stand-your-ground law, which states that force is justified when there is a reasonable belief of threat. The Castle Doctrine was revised in 2007 to broaden the cases in which one is justified to use deadly force.

However, prosecutor Donna Logan accused Rodriguez of being a gun-touting aggressor with a knowledge of hand-gun law who purposely used phrases like Im standing my ground and My life is in danger to assure his innocence. According to the Associated Press, one neighbor testified that Rodriguez, who has a concealed handgun license, had previously bragged about his guns.

Danahers widow, Mindy Danaher, tearfully testified to the courtroom that contrary to the defense, Danaher was not a confrontational person, nor was he capable of causing the dispute, saying that Rodriguezs life was never in danger.

Rodriguezs attorneys presented no witnesses in his defense. The jury deliberated for five hours before convicting Rodriguez of murder, bringing the two-week trial to an end.