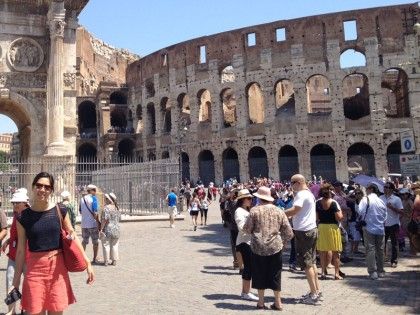 After days in and days out behind a desk, there is nothing better than to wander with curiosity in a new place. This is the gift I can give myself: Exploration. Learning history, experiencing new cultures, tasting different cuisines, and breathing a different life.

Most importantly, when I travel, I take time to reflect on my life and understand who I am at the moment. I want to share some of my recent experiences. I hope that you, too, can look within yourself this summer.

In a roaring crowd of Italian spirit  the flag waving frantically back and forth, green-white-and-red colored wigs, soccer jerseys, and giant television screens  Im standing sheepishly with my friend looking for a sign. Were in the middle of Circo Massimo, an ancient Roman chariot racing stadium that houses hundreds of thousands of people. After we searched from the Piazza del Popolo to the Spanish Steps, a kind police officer told us this is where we can watch the final Euro Cup game.

At last I see it  the Spanish flag. My friend is from Spain, so we will not be cheering for Italy, despite traveling in this beautiful country. Instead we find comrades with whom she can support her home team. Before the game, they exchange teasing boasts with the Italian crowd about whose side will win.

The next two hours are filled with shouts, groans, and excitement. Our group becomes family as we cheer together. My friend links arms with a fellow Spaniard as they wave the flag, while another jokes around with me. After Spain scores two goals, we are met with a little jeering and multiple bouts of water thrown at us. No matter, in this heat. We only cheer harder.

At the end of the game, we come out victorious, unscathed, and with a once in a lifetime experience.

My day trip to Brussels was a whim. A good one. Everything about this city is pleasant  even how I got there. On the train, the man next to me is also from New York, and hes listening to Tim McGraw. Once we arrive, I ask the station manager and helpful strangers how to get into the city center, beginning my adventure with really only one goal: Eat well.

After an amazing seafood feast, Im standing near Saint Katherines with my map, confused. Behind me an elderly man named Rafael asks if he can help me locate something. I graciously accept, and then for the next couple of hours Im given an unexpected local tour of the city. I learn about how many of Brusselss famous buildings were constructed, where the best chocolates are, and even a secret oasis that once was the site of a Dominican church.

Rafael, an avid traveler who knows several languages, owns an antique crystal shop. His tiny store is filled floor to ceiling with crystal glasses, many from the early 1900s. He shows me some of his favorite pieces and explains their origins. He even demonstrates how to evaluate them. Piiiiing  the clear ringing sound assures me this is true crystal.

Upon my departure, Rafael gifts me a pair of port glasses. A keepsake from Brussels, so that I will return again.