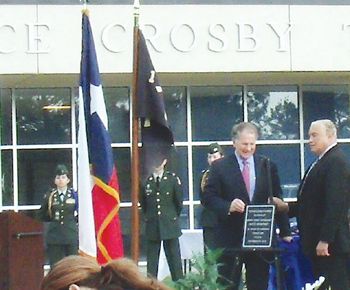 David McNerney was bestowed the Congressional Medal of Honor based on his bravery on March 22, 1967 exactly 46 years before at Poli Doc, Republic of South Vietnam by President Lyndon Johnson in September, 1967. Many of the men that accompanied him that day to the battlefield where he encountered vastly superior numbers of enemy combatants came from throughout the country to honor his memory.

Seating was near capacity as many stood during the ceremony.

Congressman Poe in Nov. 2011 proposed a tribute to McNerney recalling that after high school in Houston, McNerney volunteered with the U.S. Navy and pulled two tours of duty in Korea. He left the Navy in 1953 and joined the U.S. Army. McNerney was one of the first 500 soldier for the U.S. in Vietnam. During his third tour of duty in Vietnam, stationed near Cambodia, he and his company were sent to recover a missing reconnaissance team. He came under heavy North Vietnamese Regular attack and was wounded. Nonetheless, McNerney called in close artillery fire. He destroyed an enemy machine gun nest. He pulled wounded to safety while under enemy fire. He secured a landing zone for helicopters and refused to be evacuated although wounded by a grenade.

Poe told congress, Mr. Speaker, this is a fairly recent photograph of First Sergeant David McNerney. He kind of looks like Clint Eastwood to me and hes just as tough, because i knew him for a good number of years until he died in 2010.

This is not where Sergeant McNerneys service to America would end on that battlefield in Vietnam. He went to work for the United States Custom Service and caught a record shipment of drugs inside the Port of Houston.

Poe again returned to congress with a proposal in July 23, 2012 and asked that the Post office at 133 Hare Road in Crosby be named for McNerney.

A reception was held at the David H. McNerney American Legion Post 658 following the ceremony.