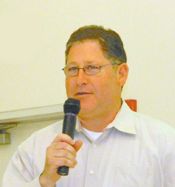 HIGHLANDS  Faced with an unprecedented amount of growth in student population in the next 10 years, the Goose Creek school district is planning on building and renovating a number of facilities to meet the needs of the school district, according to a talk given last Thursday to the Highlands-Lynchburg Chamber of Commerce by Gilbert Santana.

Santana is a member of a facilities planning committee formed last year, to study the problem and make recommendations. This citizens group consisted of 214 invited members, and 79 took an active role, he said. They spent 5 months on the study, held 11 meetings, toured 9 facilities, studied growth patterns and reviewed technology and transportation options.

On February 25th the committee made a presentation to the school board, and this was the basis for Santanas talk. He cautioned that the board had not made all decisions final, and in fact had reduced the size of the bond request considerably from the committees recommendations.

The bond election is now set for May 11th, and the district is preparing final documents to present the facts to the voters.

Santanas committee studied what they considered needs only, not wants or wishes. They came up with the need for 3 new elementary schools to meet student population growth, CTE (Career Technical Education) improvements, labs, new data technology and emergency operations center, a new transportation center, repurposing Alamo Elementary, maintenance and renovation of existing buildings to make them usable for the future, security enhancements such as cameras, locks, and restricted entries, new buses, new technology, improvements at Stallworth stadium, an Agriculture Science Center expansion, and property purchases for future use.

The total for this work came to $340 million dollars. The school board reviewed the committees recommendations, and decided that although all of the scheduled projects were worthwhile and needed, they felt that some of them could be accomplished outside the scope of selling bonds.

Santana said that the district will probably issue a vote on a bond package with two propositions, and the total of the two would come to $267 million.

Proposition 1 will be for $187 million, and include the 3 new elementary schools and other necessary construction.

Proposition 2 would be for $80 million, and include the major maintenance and renovation items in the study.

The projects that are not covered in the reduced bond package would still be accomplished, the board indicated, but they would use other available funds. In the same manner, they were able to reduce the bond package by using these sources:

— So called 313 agreements with refineries that are expanding, payments in lieu of taxes

— Use of the Fund Balance or monies already set aside previously