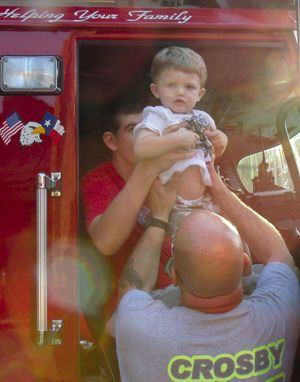 CROSBY  A little guy won over some big ones last Friday and got a wish fulfilled before he had to go to the Medial Center in Downtown Houston for Chemo-therapy.

Dominic Kasper, his father, Jacob, and mother, Christine, of the Commons in Huffman dropped by Crosby VFD Station 2 in Newport last Friday because Dominic answered his dads question, what would you most like to do? with Ride a big ole firetruck.

So, Crosby Volunteer Fire Dept. made sure that happened and Dominic got to ride the biggest fire truck in the District.