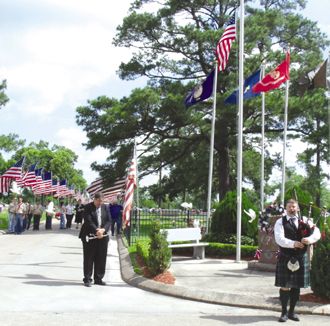 Ceremony was poignant, catharsis for Vets

HIGHLANDS  The historic remembrance of those that have served their country continues here in a solemn ceremony on Memorial Day at Sterling-White Chapel and Cemetery, the service grows larger in attendance each year and increased in poignancy this year, as a veteran of the War on Terror in both the Iraq and Afghanistan fronts spoke from his convictions and patriotic fervor.

The Memorial Day Service this year began with the Crosby JROTC placing a Memorial Wreath at the Wall of Honor inside the cemetery and especially created section for those that have served their country in the military. Flags of each branch of service fly there.

A Color Guard was performed by Boy Scout Troop #107 with grace as Old Glory was raised on high and lowered to half staff.

Jeff Moore and his son lead the pledge of allegiance and Jeff welcomed the crowd to the elaborately patriotically decorated Avenue of Flags. The flags not only displayed Old Glory in quantitative array throughout the cemetery in the center flew all the flags that have represented this country from colony, revolutionary, Articles of Confederation to first Constitutional Republic times.

Captain Rodney Reed spoke with an incandescent sensibility that evoked empathy from even the most hardened, as one that has seen the realities of the unimaginable horrors, retrieving from that duty honor. His talk feted the struggle still ongoing even as it becomes incipient that many tire of the sacrifice.

Reed was followed by Pastor Jerry Hovater of the Little Country Church, New Caney and Crosby who in a oration that matched the theme of Reed was rounded and full.

Don Guillory, for the David H. McNerney American Legion Post 658 recited the names of those who were laid to rest in Sterling-White Cemetery this year, as family members answered of their presence.

Taps was played by Craig Zlutnik and Pipe Major Tom OBrien played Amazing Grace on bagpipes as Houston Dream Doves released a drove of doves. Next R.A. Mayfield did a quick presentation from Sampson Masonic Lodge in Highlands.

Jeff Moore stated, I would like to thank all of you for attending our Memorial Day Service. It is a great honor to serve you and your loved ones. I would like to thank my staff for all their hard work and dedication and a special thank you to all the local vendors who have contributed to this years service.