After Crosby ISD hearing, Roder no longer vice-principal but can re-apply to district 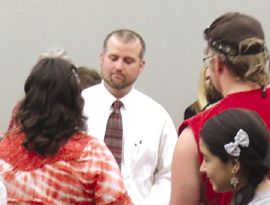 CROSBY  A Special Called Grievance Hearing of the Board of Trustees of Crosby ISD was held May 23 at 6:30 p.m. at the CISD Operations Center to hear a Level Three Appeal by Dr. Ernest Cap Roder III.

At issue was his contract not being extended by Crosby ISD as Vice Principal at Crosby High School. Ninety three people not called into closed session to testify appeared at the meeting.

Originally a quorum of five was in attendance, later Kasprzak and Eagleton attended in closed session. An attorney and Court Recorder also attended the closed session with the Principal of Crosby High School and Mr. Roder.

The attendees sat until 9:43 p.m. until the Board returned, it was then in open session that the Board voted.

Kasprzak moved that the Level 2 Decision be upheld however he recognised in his motion that the Superintendants recommendation that he be allowed to move to another Assistant Principal Position within the school district with full opportunity to develop his career.

The motion was seconded. The vote was 6 votes for and JoAnne Crawford against. The attorney asked for clarification of who had opposed the recommendation. Then the meeting was adjourned.