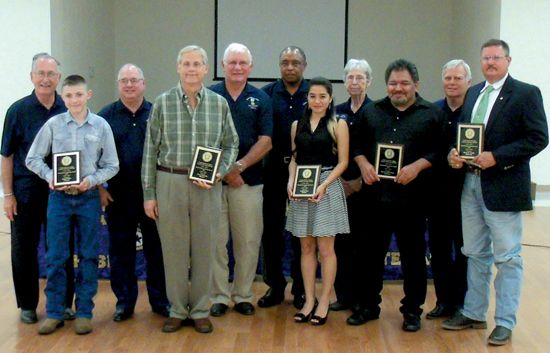 CROSBY  The David H. McNerney American Legion Post 658 presented their Leadership Awards this past Thursday to one student, one teacher, one fire fighter, one lawman and one preacher.

Awardees, their families, their parishioners and friends attended the ceremony at the Legion Post for a ceremony in which the men that have served their country bestow tokens of their appreciation for Community Leaders. The best of each categories are recognized in their categories from young leader to mentor from hero to champion and recognition of those that take up the cloth in the spiritual battle.

For these categories a young woman that demonstrated the abilities that America needs. She was called the true future of the United States by Commander Boyles.

The teachers in Crosby ISD chose Raymond Blanchard as best representative of teachers at Crosby ISD.

Lieutenant Ricky Larkin was recognized not only for his selfless dedication as a law enforcement officer but also for his perpetual involvement within volunteer organizations.

Rev. Dr. Larry Koslovsky was recognized for his calling, dedication and practice of ministering. He is known to all as Brother Larry. He entered the ministry 30 years ago. His history includes years in the 1980s as an outreach minister and his active support of local, state national and international mission efforts.