Rotarians are practicing for the Big Washer Tournament 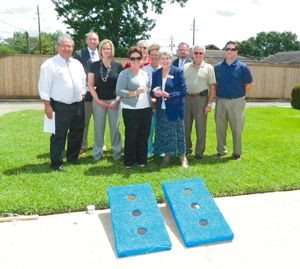 HIGHLANDS  Out behind the house, Rotarians are practicing their washer throwing techniques in preparation for the upcoming 7th Annual 3-Hole Washer Board Charity Tournament, to be held next Saturday, September 14th at Charlies Ice House. Charlies is at 906 N. Main Street in Highlands, and the tournament starts at 12 noon sharp, lasting until 4 p.m.

This event has become a city-wide tradition, with two person teams coming from various clubs around the Rotary 5890 District, as well as local Highlands folks, to compete for bragging rights and the three top positions in the double elimination tournament.

Teams are also expected from North Shore and Baytown clubs. The public is invited to field a team, also. You are welcome to come and watch if you dont play, and there will be refreshments, and live and silent auctions.

It is expected that about 50 teams will compete in the tournament. Entry fee is $50 per team, and all proceeds go to the Rotary Foundation, for worldwide projects and also local projects.

Last years winners were #1 Team WISHY WASHERS, or Robert York and Clinton Forsythe. #2 Team was RINGERS, Justin Graves and Brandon Sweeney, and #3 Team was DEAD RINGERS, Dane Listi and Jeremy Rosenkranz. These teams will be at the tournament to defend their reputation, we have learned.