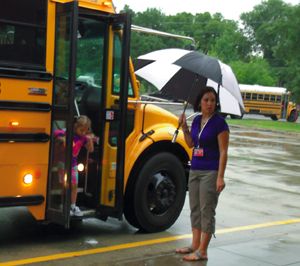 Among the big local accomplishments on lowering first day hassles Crosby ISD streamlined their enrollment and re-enrollment with new forms that can be downloaded at home and submitted with less waiting.

Returning students, re-enrollment forms were pre-filled in with previous information given, but with fewer pages and no repeat sections.

Crosby ISD warned parents about an incident on Tuesday through their phones and Facebook page concerning a possible stranger danger.

On the morning of August 27, 2013, a female intermediate student was approached at her bus stop in the Newport neighborhood by a Hispanic Woman with Blonde hair around the age of late thirties to early forties.

The woman in question was allegedly attempting to lure the student to her vehicle by posing as her mothers friend and enticing her with jewelry while calling her by the name of Amber. That name was unknown to the student. The car was identified as a burgundy/red, late model Nissan Versa.

The student did not approach the vehicle, and the vehicle sped off once the students bus approached.