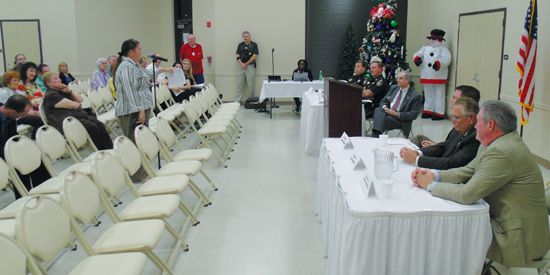 The meeting was officiated by Robert Soard, First Assistant County Attorney. Precinct 3 Constable Ken Jones and Precinct 4 Constable Ron Hickman, and Majors from the Harris County Sheriffs Department and the Precinct 2 Commissioner were on hand to hear the comments and to make their own.

Some 20 residents spoke for regulation of the game rooms and four against regulation and another mostly between the options.

As first recorded in the Star-Courier in December of 2012 Wayne Smith R. 128 Texas District proposed legislation that would enable Harris County to strengthen the authority to enforce regulation of game rooms at which gambling is being conducted. According to Constable Hickman, 135 search warrants have been served on illegal gambling operations doing business as game rooms. In the last 5 years in these illegal game rooms there have been over 100 aggravated robberies. In thee same area and time there have been seven homicides. The dramatic rise in the number of game rooms has prompted Harris County as a body corporate and politic under the laws of the State of Texas, is tasked with protecting the health and welfare of its residents.

The regulations would give the county to investigate game rooms for violations of regulations.

Huffman resident Leslie Dean spoke first, she is President of the Harris County Emergency Services District #4, she favored the regulations as the game rooms often create a hazard to the occupants as well as firefighters, and medics performing services at them. Dean laid out a cogent argument about the crowding, locked doors, lack of entries and safety issues with unregulated game rooms.

Next Attorney Steven Gates spoke opposed to regulation, indicating that regulations only serve to change the location of illegal facilities. He argued that regulations in the past have only served to exacerbate the problems. There has not been one case of robberies solved by Houston Police Department from clear window regulation.

Personal stories of loved ones losing everything to game rooms were pronounced from many speakers in favor of regulation. Velma Ellison of Alliance Properties spoke of the impact of game rooms Ministers from Huffman Baptist Church, Keenan Smith of Crosby Church, and Tim Edwards of First Baptist Church Highlands all offered compelling arguments for regulation of game rooms.

Constable ken Jones gave a most dramatic statement regarding illegal activities (drugs, unfair gambling practices and robberies) that without the regulations his office could not interdict and therefore presented a menace to public health and safety.