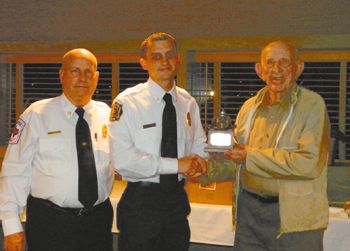 HIGHLANDS The Volunteer Fire Department held their 2014 Installation Banquet and Awards ceremony last Saturday night at the Monument Inn. Named to the top award as Firefighter of the Year by popular vote of the firemen, was Station 1 Captain Kyle Little. Little was honored earlier in the evening, as top responder with 362 calls answered, almost 100 more than the next fireman.

Chief Little also reviewed the department accomplishments and history of service calls for 2013. Highlights included ordering a new Dodge Diesel ambulance, and two new identical engines to replace E17 and E27. The vehicles will go into service in March and September, respectively. The department also installed a new flag pole at station 17, and new security cameras. A wheelchair life was installed at station 17 to reach the second floor.

Glenn Chisholm reported on accomplishments in the training of new members, and training and certification of existing firefighters. He mentioned that the department is using the Houston Fire Department training field to help members improve their skills in structural firefighting and vehicle extrications. ESD#14 purchased a DVD training program, and as a result 8 firefighters received or upgraded their certification level.

Nick Matula reported on EMS accomplishments for 2013. The department has a new Lucas mechanical CPR device. This department now has 17 part time paid crew. In the last year, they had 3 CPR incidents to full recovery.

Chief Little reviewed the history of the department for 2013. He noted that there were 1985 calls for service: 1559 EMS calls of which 873 required transport to a hospital, and 377 fire calls. Life Flight was called 14 times. The department responded to 130 Motor Vehicle Accidents. Little noted that the totals were all down slightly from previous years, and attributed some of this to fire and life safety instruction that students get at school.

Little mentioned that one of the goals of the department in 2014 will be to remodel or rebuild Station 27.