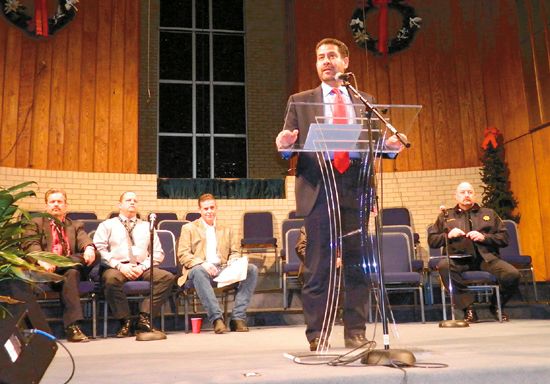 HIGHLANDS  After experiencing a high number of murders in this community last year, the citizens of Highlands decided that something more had to be done to put a stop to the killings. Five killings have happened since last January 2013, and two remain unsolved.

As a first step, they asked their local law enforcement officers to meet with the public, and this forum, organized by Highlands resident Mike James, was the result. James is deeply involved because one of the victims of murder this year was his father.

Otis James was murdered in his house on 4th Street, allegedly by a neighbor, Randy Segura, who has been charged with the crime. Otis James pickup truck was stolen after the murder.

The meeting, billed as a Crime Watch session, was held last Thursday evening at 7:00 pm at the First Baptist Church on Magnolia Street. The sanctuary of the church was filled to capacity, with at least 500 persons in attendance.

Also attending were Sheriff Adrian Garcia, and from his staff Major Stephen Marino and Capt. Joel Inocencio. Pct. 3 Constable Ken Jones was present, and from his staff were Chief Deputy David Franklin, and Capt. Jasen Rabalais. Throughout the audience were other officers, including Capt. John Moore and Lt. T. J. Gainey.

The evening started with welcoming remarks from pastor Tim Edwards, and then moderator Mike James introduced the speakers from the Sheriffs office and the Constables office. He also asked that everyone present sign registration cards, so that they could be included in future meetings and crime fighting actions.

Sheriff Garcia spoke first, and outlined the history of his governance of the department since 2009. He mentioned budgets and staffing, pointing out that until 2011 the county had a hiring freeze, and he lost many deputies. Now he is able to hire, and has added over 100 deputies through cadet classes and transferring jailers to patrol and other duties. Also he said there are over 83 new deputies in training at the present time.

In response to questions and criticisms about the effectiveness of his department, he pointed out that due to a large number of calls for service, the HCSO must prioritize incoming calls, and answer the most serious and life threatening calls first. He suggested that many burglary calls and similar crimes could be reported online on the sebsite, without the need for an onsite deputys call.

The Sheriff also pointed out that he has a youth program, the Explorers, that is introducing young boys and girls age 14 to 21 to the procedures of a sheriffs department. The goal is to help them avoid criminal actities, and to hire some of them as deputies in the future.

Constable Jones reported that his department, in conjunction with the Sheriffs office, had formed a Task Force to proactively respond and investigate crimes. It is staffed by 3 constables and 8 sheriffs deputies, he said. In Highlands alone, he pointed out that in the last 45 days they have made 18 felony arrests, suggesting that this would seriously reduce the incident of crime. He suggested the importance of the public informing authorities through tips, including using Facebook.

At this point, the floor was opened for questions or comments from the public.

Several persons asked how to set up a Crime Watch program. It was noted that this meeting was promoted as a learning session for this purpose, but instead it consisted mainly of comments from both sides of the crime subject. However, the authorities offered to help set up small Crime Watch groups in any neighborhood that was interested, and said that the Constables office, through Lt. T.J. Gainey, would come out to instruct citizens on the process.

A question was whether Highlands could get a sheriffs substation back, as it had several years ago. The Sheriff was somewhat evasive on the answer, noting legal problems that no one seemed to want to resolve. However, a location in Woodforest Bank was mentioned. The Sheriff said one of the benefits of a storefront would be a visible sign on Main Street, as a deterant to criminals.

A citizen complained about a recent burglary, where the two juveniles had been identified, but not prosecuted. Deputy Rabalais stated that Texas law made it more difficult to prosecute juveniles than adults, and that the district attorneys office sometimes advised against it.

Pastor Phillip Morris said that the power of prayer would help the crime situation in the community, and urged the community to embrace that idea. His church, Restoration Church on Jones Road, will hold prayer sessions this month with that goal.

The question was asked how many deputies are staffed to watch the Highlands area. Captain Inocencio explained that this is District 3, Section B (not A or C), and that it covers Highlands, Crosby, Baytown, and Lynchburg. For that areas, there are usually 2 to 4 patrol deputies assigned at any one time. However, there are other Sheriffs specialized deputies working the area at the same time, including task force, crime control unit, high risk officers, undercover, and others.

Major Marino added that 5 new deputies are being added to those assigned to this area. Also, a helicopter has just become available, he said.

Capt. Rabalais said that since February of last year, his Task Force has made 300 arrests.

Speakers from the audience, and from the platform, differed on the facts on whether crime was down, or increased.

Jones and Garcia argued that a large number of arrests are being made, indicating effective policing.

Citizens, including Jutta Mayfield of Pig Supply, differed vehemently. She noted that her business had been burglaried 3 times in the last year, without arrests.

Carl Cooper and Calvin Hobbs complained about known drug activities and derelict houses occupied by non-tenants, in the Clear Lake and San Jacinto Street neighborhoods, and no police action on these. The Sheriff said tell us the details and we will act, so these two cited addresses of the problem houses.

It has been announced by Mike James that there will be a follow-up meeting scheduled in the near future, to further deal with these problems but also to help neighbors set up the Crime Watch programs near them.

It was noted that Crosbys Newport subdivision is also having a crime watch meeting, on Wednesday, January 8th. This meeting will introduce the use of Nextdoor.com, a social networking program on the internet, as a means to implement neighborhood crime watch programs in an effective method. See the article above on this page.

Interviews in the days after the meeting with Highlands residents indicated to the Star-Courier that they were not satisfied with the results of this meeting, believing that authorities did not listen and did not have the motivation to act to reduce crime.