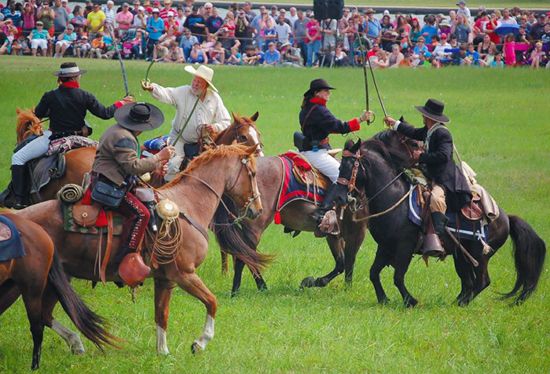 Catch the eye of a youngster the first time they hear the report and feel of a Napoleon cannon going off nearby to understand the difference between Dull History and Real History.

The view from the inside is much more textured than one can see as a visitor just as a play has more insight for the actor than the audience gets to experience. Among a bevy of interesting facts for those on the inside this year was that the radio ceased working when communication is most needed. That time is just before the last battle when the Texians launch their final assault on Antonio Lopez de Santa Annas camp. But, the battle went off without a hitch thanks to some quick decision making on the part of commanders and the rigors of communiques that passed from the commanders between the volunteers prior to the reenactment. Knowing hand signals was also helpful for the man that played General Houston this year.

On April 21, 1836, the Mexican camp and commander had little fear of the diminutive rabble army led by General Houston. Santa Anna had no guard on duty as he took siesta in the heat of the day. His left flank would be hit by his fastest moving contingent and his right would be hit by a wave of solid infantry that had hid during their advance behind trees and shrubs. It took timing and luck when General Houston did it and when re-enacted last Saturday.

The upshot of all of this should be that preparation and planning make or break important events in life.

However, although General Houston did make preparations, communicate effectively and wait patiently for his enemy to make a mistake, then act on it; it is even more of an act of character that he did so as Interim President David G. Burnet was telling him he was wrong. Burnet was giving him orders to attack the 8,000 strong Mexican Army on the road to Harrisburg (now called Houston) and ordered Houston to be left for dead on the battlefield.