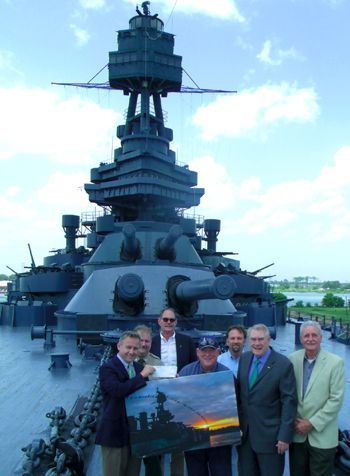 In 1948, the legislature permanently anchored the Battleship TEXAS near Buffalo Bayou and the Houston Ship Channel at the San Jacinto Battleground State Historic Site. This year the Battleship celebrated its 100th anniversary by honoring the battleship, her legendary history, and paid tribute to the surviving crew members who proudly served on the ship during World War II.

Our area is fortunate to be the home to several of the most remarkable and interesting landmarks in the state: the San Jacinto Battleground, Monument, Museum and the Battleship TEXAS, said Rep. Smith. As a veteran, Im proud to support preserving this historical treasure as a symbol of our nations military history and I want to thank Anheuser-Busch for recognizing the importance of donating to the preservation of this magnificent ship.

While the Battleship has taken on a lot of repairs in the past few years, Rep. Smith remains committed to raising funds to repair and hopefully one day dry berth the TEXAS in its current location.

Both the state and federal entities, who are responsible for the ships well-being, are moving forward with a repair initiative to improve the ships overall sustainability and keep her afloat until more funds can be raised to permanently dry berth the ship.

Thursday, a special crew of restorationists and machinists were repairing the 40 m.m. antiaircraft weapons while answering questions of visitors.

I want to recognize and thank the numerous individuals and organizations for their generous and continued support of this project,+h said Rep. Smith. I also want to thank Governor Perry for his leadership in appointing members of the local community to the Advisory Board as they have had a big hand in supporting this cause with me. Jimmy Burke and Calvin Mundinger both former Mayors of Deer Park and Baytown have a long intimate relationship with the Battleship and I believe it is imperative that we continue to keep our local leaders and community involved in the preservation of this ship so that our future generations will be able to visit and continue to enjoy this national treasure like we have been blessed to do. Smith said.

To learn more or to make a donation, please visit www.BattleshipTEXAS.org