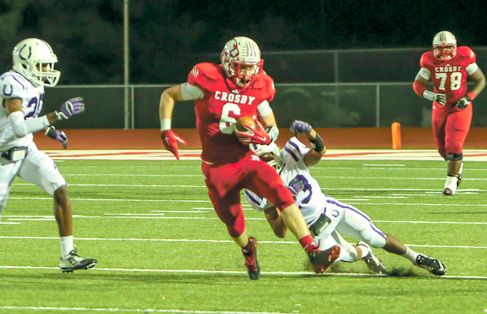 Cougar Coach Jeff Riordan would comment after the game, We made as many mistakes as we could and still win against a very good team. We have to stop shooting ourselves in the foot.

He probably means that the number of times yellow flags hit the gridiron was significant. It certainly was common.

There was an eternal pause early in the game as the score was 0-7 before the end of the first five minutes. It would take the rest of the first quarter for Crosby to put 7 on the board, too. That score came at the end of a dramatic defensive duel.

The Cougars would take the lead for much of the rest of the game after Craig Williams would pull a 41 yard dash early in the second quarter.

With about two minutes to go in the half the Broncos would answer the seven points with two field goals. Half time was a fine show of talent on both sides reflected in the 14-13 scoreboard.

Dayton was holding the initiative but staggered by a determined Cougars defense. As the second half opened, the Broncos would score a touchdown on an incredible series of passes intermixed with fragile attempts to run and a bunch of call backs of first downs for the Cougars. Crosby would suffer 14 penalties at 126 yards back from the line of scrimmage but it would be more than 200 from the place the Cougar runner was taken down back to the penalty mark. Dayton would have 6 for 67 yards, including a single facemask called.

Then the Cougars got their second wind and inside 30 play action seconds later would push in C. Williams at three yards after a dazzling 24 yard set up play. Just four minutes later Carlos Grace blitzed 10 yards unscathed amid a flurry of Bronco white and blue.

Crosby would rack up 21 points in the third quarter and would need everyone of them. It was Carlos Grace again with a sky-grab from 10 yards out turn and run 18 more yards that would get the points.

Trevor Larkin would catch three passes on the night to gain 99 yards for his team when they were needed most. Tristan Cotton would throw 22 times, connect for 9 but get picked three times with intermittent high pressure from the Bronco rush. There was no question that the third quarter was all Cougars. Convincing was T. Perry nabbing an interception and breaking initiative back to the Cougars.

The Cougars it seemed had relegated the Broncos to the ground but the Broncos pulled every type of run imaginable burning up the fourth quarter until just 9 minutes were left. The Broncos Kyle McBride would carry the ball 11 yards himself to get a touchdown fifteen seconds later. Then he would make two more points by catching a pass from Keandre Rose. The Cougars appeared stunned by the dazzling mix of plays the Broncos were running. After two attempts to get traction the Cougars had to give the ball up to the Broncos again and with 16 seconds left, the Broncos would tie the score on a pass from Baughman to Jacarius Keener.

The Cougars had amassed 289 yards to 186 on the ground and were behind 159 to 179 passing. As overtime began the Cougar defense was wiser and wilder in shutting down the run. The Cougars would hand off to Grace from fifteen yards out for his third touchdown with a lot of blocking and an open path to the goal.