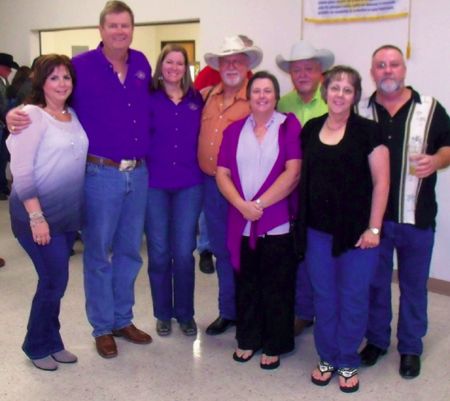 CROSBY  The Cody Stephens Memorial Foundation Go Big or Go Home Banquet and Auction brought together the best of east Harris County in optimism and efforts to save the lives of young athletes.

About 450 people attended the banquet and among these were represented most of the organizations and groups that are involved in one way or the other in improving life locally. The Cody Stephens Memorial Foundation is about saving young athletes lives by testing for Sudden Death (S.D.) or Sudden Cardiac Arrest due to heart conditions. The foundation and others are promoting testing called an E.C.G. and having that test reviewed by a cardiologist. The Foundation has helped numerous schools throughout Texas fund the testing and has enlisted the help of hospitals and cardiologists in making the test more affordable.

During the event, Scott Stephens, father of Cody, displayed the new E.C.G. devise that can be used to perform the test. It is now about as big as the new I-tablets that people use for computer work mobilely now. It once was wheeled in within a cart about 4 feet high.

What began as a effort to get more testing done in local schools for S.D. has become an effort to have the test performed statewide to save more than the eight lives that can be verified since the extra testing has been begun.

In attendance were not only were Dan Huberty, R., and Wayne Smith, R., local Texas House Representatives but also Kathy Grant and David Courreges lobbyists that undertook getting Texas legislation passed pro-bono for the Foundation to have mandatory E.C.G. testing throughout the state. Unable to attend but backing the bill is Representative Sylvester Turner.

According to Stephens if the bill remains unchanged from the one that was not passed last time is athletes that are first year and third year participants would get an E.C.G. testing along with their sports physical. No state has this testing yet but wed be the first and the others would follow.

Stephens expects opposition to the Cody Bill this year. The American Heart Association is not in favor of mandatory testing for S.D. The Heart Association expressed fears that others would not do the testing correctly in a recent article. They favor individual testing sporatically at the current rate.

The entire event was filed with ironies and harmonics. During the shotgun card raffle, the seven of diamonds was pulled first it was one by Codys brother (on money loaned him by his grandfather) but his father requied him to not accept the win then the six of spades was pulled next. All familiar with the event know that Cody Stephens football number was 76. The live auction pulled in $76,000 in total. The top auction sale was a Cody Stephens #76 football jersey to David Mendez of Turner Chevrolet for $4000.

In other events,the Silent Auction or Table Sales was $20,000. Corporate sponsorship came to $9,000. Sponsorships from Crawfish Shak and Oil Well Tubular helped make that mark.

Martha Lopez Anderson of ParentHeartWatch.org came from Orlando, Florida To see how they do it in Crosby, Texas.

Her organization is the national organization of parents that have lost children sudden cardiac arrest and promotes awareness of testing and treatment of athletes.

East Houston Regional Hospital is now screening the area for free, now 5 other hospitals are involved, Memorial Hospital is getting involved in a big way. Stephens concluded, Im hoping I can get the Rural Hospital Association involved screening throughout the state, screening areas that are hard to reach.