Cougars run away with homecoming game 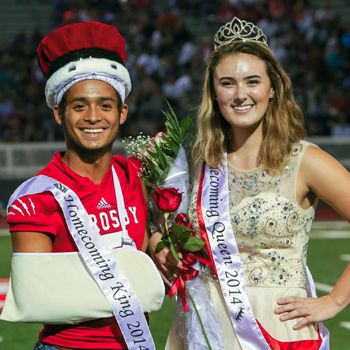 CROSBY  There remains two undefeated teams in district so far Crosby and C.E.King.

Galena Park was successful in scoring 10 points in the second quarter but nothing else.

Crosby scored first after about seven minutes into the game on a dash from Dontal Allen. Then Emmanuel Netherly snagged a pass from Tristan Cotton about a minute later for another touchdown.

Early in the second quarter Trevor Larkin landed a pass from Cotton for 25 yards to score a touchdown.

Three minutes of play later J.D. Duran would make a catch and dash that would get the entire beyond capacity crowd to their feet for another TD. The Cougars added two sections of portable stands. Galena Park was stopped cold 28 yards from the goal on a drive that started with an interception. They kicked in three points.

Although Galena Park would have more first downs throughout the game they fell short in each category.

Craig Williams brought out a special screen run for 28 yards to give the cougars another score with just under seven minutes left in the third quarter.

Trevor Larkin would again score on 48 yard pass from Cotton with three minutes to go in the third quarter.

Alec Lewis would herald J.J. Watts by pulling down an interception and dashing 50 yards to a touchdown with about 2 minutes left.

In the fourth quarter, it was all Crosby for two more touchdowns. The first was by Netherly on a 47 yard run and the next was by Caros Grace after the team had pushed all the way down field.

Cotton went 19 complete of 25 throws and one interception.