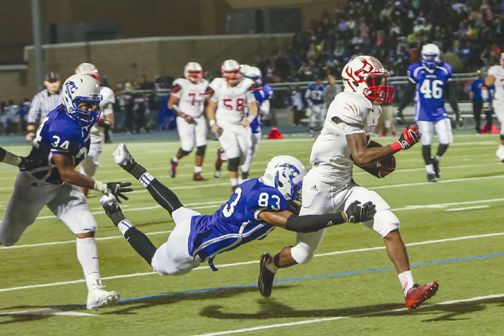 HOUSTON  The Cougars were outscored by C.E. King Panthers by a single touchdown but the struggle for 21-5A continues.

The result of the Nov. 7 Game of the Year did not yield the first time Crosby went undefeated since 1947 but did make the district conflict score 9-1 for both the Cougars and the Panthers. Co-District Champs with C.E. King, the top four teams go to play-offs. C.E. King is holding number one seed, Crosby number 2, Dayton number 3 and Kingwood Park is number 4. Crosby plays Beaumont Ozen Thursday at Channelviews Maddry Stadium at 7:00 p.m.

C.E. Kings Jonathan Brantley passed for a 21 yard touchdown to Desmond Coleman to break the defensive stalemate half way though the first quarter.

The second quarter was all Crosby on defense and two touchdowns. Tristan Cotton handed Carlos Grace a seven yard run to equal the score. Craig Williams would catch a fabulous pass from Tristan Cotton and put Crosby up by seven at the half.

But #3, Trayveon Williams of the Panthers, was much like catching a greased pig at the hillbilly fair, he emerged from a cloud of red and white still charging throughout the third and fourth quarter. C.E. Kings Panthers would make three touchdowns in a row. Williams would end up with 239 yards.

Not that Crosbys defense was lacking, A. Brown pulled down an interception that would put C.E. King off of their air war for several downs.

When minutes counted, just eight left, Cotton would connect with Trevian Edwards on a short pass after a long drive to pull within seven.

The game all came down to a snap over Cottons head that lost 15 yards. It was something unfamiliar for Crosby a set back at a critical time.

According to Coach Riordan, Im very proud of how our team competed, they played very hard. They had a real good team. We gave them a run for their money, we were ahead at half time, just couldnt hold on. We still havent played our best game yet. We are waiting to peak, it would be a good time to peak right now, right as we start the playoffs. We are excited because the kids came back hungry to work this week. Nobody likes to lose but sometimes a lose will wake you up a little bit.