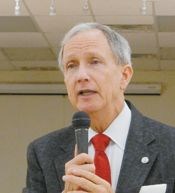 HARRIS COUNTY  County Attorney Vince Ryan, who won a judgement against two alleged polluters in the San Jacinto River Waste Pits trial, has decided to return to the courts to try to get a verdict against the third defendant, International Paper Company.

This company was found not guilty by a jury, in the midst of the trial. However, the other two companies decided to settle for about $29.2 million, without knowledge that IP had won their release.

Attorneys from Ryans office filed for a new trial last week. They claim that the judge in the trial, District Judge Caroline Baker, made numerous errors and therefore they were not able to get a fair hearing.

In the original suit, Harris County had asked for damages or fines of as much as $25,000 per day, starting in 1973 and continuing through 2008. If awarded, the sum would have been as high as $600 million dollars.

The lawsuit contended that the three companies involved allowed cancer-causing dioxins to leak from abandoned disposal pits on a piece of land north of the I-10 bridge, near Channelview and Highlands. The companies involved were McGinnes Industrial Maintenance Corp., its successor Waste Management, and the manufacturer Champion Paper, which succeeded into International Paper. The first two companies settled with the county, and International Paper won a jury verdict, that Ryan know wants to retry.