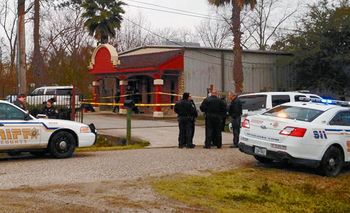 BARRETT STATION  An armed robber attempted to hold up a game room in Barrett Station on Tuesday afternoon, but was thwarted by a security guard and the manager, who fired at the robber, fatally wounding him. The robber entered the building wearing a mask and gloves, according to witnesses.

The attemped robbery happened at about 4:00 p.m. in a new game room building, near the intersection of FM2100 and FM1942.

Witnesses said that the robber entered the game room, and go into an altercation with the security guard, who was pistol whipped in the struggle. The guard then opened fire on the intruder. The manager of the game room also shot at the man, who ran out the door and colllapsed in front of the building, where he died.

No one else was hurt, according to authorities, although there were about five to seven other customers in the building at the time.

Deputies found three weapons at the scene, and eight shell casings inside the game room. The manager and the security guard were questioned. The security guard sustained injuries to his head, and was taken to a local hospital for treatment. He is reportedly in stable condition.

Witnesses said there may have been more than one robber, and deputies are looking for a black Dodge Charger, that may have been a getaway vehicle.

If you have any information on this case, you are asked to call the Harris County Sheriffs homocide office, 713-221-6000.