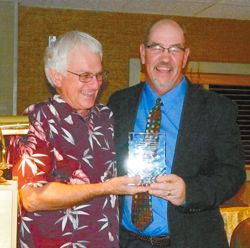 HIGHLANDS  The Chamber of Commerce held their awards ceremony and installation of board members last Thursday night, at the Monument Inn. Over 100 members of the community joined in the festivities.

It was a big night for one member, Jim Wadzinski. Not only was he the MC of the event, but he also was awarded the prestigious Terry Davis Community Service Award, and his employer, Community Toyota, received the Business of the Year Award, accepted by owner Roger Elswick.

The evening had a new feature, a keynote speaker. Chad Burke, CEO of the Economic Alliance, representing 160 companies in the ship channel area, spoke about the economic strengths of the region, and some of the problems and promise to come.

The top award, for unselfish community service, is known as the Terry Davis Award and went to Chamber president Wadzinski. It was presented by previous winner Weston Cotten.

The new board was sworn in by Judge Don Coffey, with his usual mix of humor and seriousness.

Retiring board president Jim Wadzinski gave a motivational talk about his last 2 years in office. He urged the members to invest in ourselves and find something worthwhile to give time to.

As the new president, Traci Dillard, took office, she smiled and told everyone her term would be different than Jims, and to expect it. She said her goal was to keep the Chamber relevant in the community. She noted the importance of Highlands, the Eastern Entryway to Texas History.