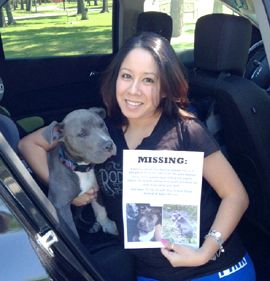 NEWPORT  A Baytown homeowner was given an example of faith and law enforcement when she was reunited with her American Bulldog ward last week.

On March 24, the Padillas returned home from work noted their gate was open and one of their two dogs was gone. The mixed breed lab that remained was growling at his masters in suspicion.

So, they asked their neighbors, got on social media called Baytown P.D. and was referred to Animal Control. They made a report and got fliers printed to put up all over the neighborhood.

Most impacted by all of this was their 4 year old son. That night the family prayed and the son asked that his dog be returned by the weekend. Tuesday became Thursday and after prayers, Elizabeth Padilla asked her son, You believe it, dont you?

Meanwhile in Crosby, Deputy Greg Nason was on a side street from South Diamondhead Boulevard in Newport and sees a local man walking a dog without a lease. In Harris County the leash law indicates cats and dogs may not run loose or have access to streets or sidewalks in unincorporated Harris County. So the deputy asked the man that was walking near the chocolate American Bulldog, Is that your dog?

How long have you had that dog? asked the deputy.

Well, I found it when I was out at my friends house the other day in Baytown. the man said.

What were you doing with your friends when you found the dog? the deputy continued noticing that the man began to fidget and stammer.

We were just having some burgers and I saw this dog, ya know just walking along the street.

What street? How did you get your hands on the dog?

The Deputy called Animal Control in Baytown and asked about the chocolate American Bulldog and the woman at Animal Control said, Well, yes deputy we have just gotten a copy of the flier from a local family and I am looking at it right now.

Elizabeth Padilla showed up at a park in Newport to claim her brothers dog, just in time to answer her sons prayer before the weekend with all manner of papers and fliers for the deputy. Since then the extended family when hoping for anything they jokingly ask her son to pray it into reality. We also pray in gratitude for Greg Nason.