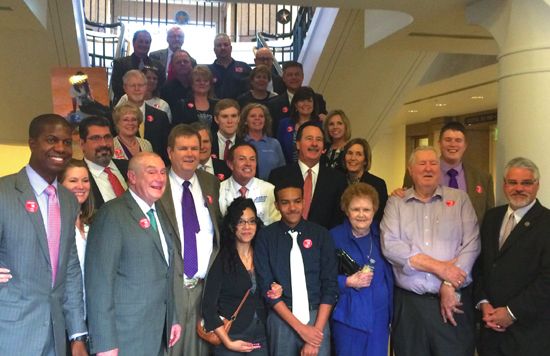 According to State Representative Wayne Smith (R-Baytown to Crosby,) On March 24, the Texas House Committee unanimously approved legislation relating to cardiac assessments of participants in extracurricular athletic activities sponsored or sanctioned by the University Interscholastic League (UIL). House Bill 767 will now be considered in the House Committee on Calendars and, from there, is anticipated to be deliberated on the House floor.

During testimony before the committee Stephens expounded on his personal loss and a barrage of facts related to the testing. One fact is that when the current high school athlete test was required the E.K.G. did not exist in anything like the compact and portable test that is available now. Thus far nine student athletes have been referred for intensive follow up or surgury. Sudden cardiac arrest is the leading cause of death among student athletes, although fortunately it is rare. It can happen when the heart has a structural defect or abnormal electrical signaling, conditions that show no symptoms.

Since the death of Cody Stephens in May of 2012, the Stephens family of Crosby, lead by father, Scott Setphens, has raised over $500,000 to offer the E.K.G. test to those school districts that could not afford or did not require the test. Scott met with state lawmakers to get a Bill to require E.K.G.s for students who play sports. We test eyes, Stephens said. We test ears. Lets test the heart.

Representatives Sylvester Turner, Wayne Smith and Dan Huberty were supporters once having heard from Scott Stephens.

The path chose me, Scott said, I didnt ask to be here.

It was an easy decision to author a bill that would require heart screening for student athletes, Representative Smith said. If we can save even one kids life, it will be worth it.

Whatever  the committee voted 11 to 0, to recommend the bill to the House of Representatives. According to Repersentative Smith, Cody Stephens story deeply resonated within the small town of Crosby in East Harris County, and his family has worked tirelessly to ensure other student athletes receive the heart screening Cody did not. Scott Stephens founded The Cody Stephens Go Big or Go Home Foundation following the tragic loss of his son. To date, the Foundation has screened 30,000 students across Texas by approaching school districts with grants to help establish a screening program for their athletes. In 2014, seventeen students received some form of heart surgery following the results of their heart screening, a surgery that could prolong their young lives.